‘He’s going to win’, I said to Emma as I switched the television off. It was 10.30 at night and we were holed up in a fairly standard looking hotel room in Anaheim California where we had been watching the US election coverage. And now we live in a world where Donald Trump is President elect of the USA.

Fortunately, we were on our way to Disneyland, the happiest place on earth. Where better to forget about politics and the future of the planet. Amy and Oliver were excited. It was visible. They walked the kilometre and a half from our hotel to Mouse Land with an extra spring in their step. Which is curious considering we have been such neglectful parents that they don’t know all that many Disney characters. We pulled up a few old cartoons on YouTube earlier that evening as introduction to Mickey, Donald, Goofy, Pluto, Chip and Dale and the rest of the gang.

Were it not for the fact that they have been such troopers hiking here, there and everywhere this year I don’t think Disneyland would have featured on our itinerary. They are troopers though and we figured it was now or never. So now it was. We arrived about forty minutes before the gates opened, queued to get through security and then queued again to get through the gates.

So much queueing and that was just to get in! There are very few things in life worth queuing for as far as I’m concerned and this had me wondering what we had gotten ourselves into. Three days in queues? Is that what we paid for? Fortunately, once we were inside, the parks seemed to soak up the people. With thanks to a few helpful tips from a couple we met at our hotel the night before we headed straight for the most popular attractions and managed to get them done with only 20 minutes in a line.

Later in the day those same rides had queues up to two hours long. Two hours! In a queue! For a three-minute ride! Who does that? I felt the urge to go and start interviewing people about what compelled them. The longest queue we would sign up for was thirty minutes. Judicious use of Disney’s ‘fast pass’ system meant we didn’t miss anything we didn’t choose to miss (like the Tower of Terror).

My favourite ride was ‘Star Tours’, a simulator which put you aboard a shuttle and whisked you off into the world of Star Wars. It was so good I really felt I was in the movie, whizzing through space shooting Tye Fighters, evading Darth Vader, dodging trees on Endor and soaring through Naboo. So we did it again after which I lobbied the family to do it again and again, but I was overruled in favour of another turn around the Matterhorn.

Oliver’s favourite ride was the biggest of the big rollercoasters, ‘California Screamin’, complete with loop de loop. We had to coax Amy to come along the first time with a healthy dose of parental pressure. We told her she’d love it and were relieved when she didn’t hate it. She and I rode together. She didn’t open her eyes. Not once. The look on her face just said please let this be over. She was however happy to go again and then another two times after that. She even watched where she was going on all but the loop, where the additional gravity must have forced them shut.

Amy’s favourite ride was the ‘Grizzly River Run’; a Disneyesque recreation of the Californian Sierra Nevada mountains complete with white water rafting. Fortunately, it was hot, so we didn’t mind getting soaked. In fact, we went back seven more times just to get soaked.

Emma initially told me she didn’t know what her favourite ride was but then decided it was the big coaster just like Oliver. Each time we went she urged us to remember to smile and put our hands in the air on the bend with the photo machine, also known as a camera. We only got it right on the final spin.

Better than the rides though, in my opinion anyway, became the pursuit of hat selfies. The Disney merchandising department has outdone themselves when it comes to hats. You’re probably familiar with the traditional black mouse cap and ears, but now there’s more. Oh so much more. While Amy and Emma were off perusing some other form of merch, Oliver and I spotted a Goofy hat we thought was funny so we put it on and took a selfie. Next to the Goofy hat was a Chewbacca hat, so we put that one on as well and took another.

After that we were on a hat hunt. Between rides we moved from store to store looking for new hats, eventually snapping selfies in more than sixty different variants, and we didn’t get them all. We kept spotting new ones on people wandering amongst the crowds and wondering where they got them? Well I did at least. There is a chance I was a little more into this sport than Oliver. I even contemplated stopping people and asking where they procured their most excellent headdresses, but that seemed a little overzealous. 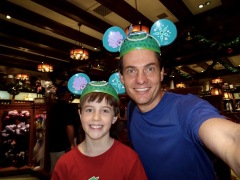 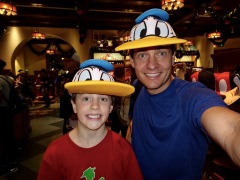 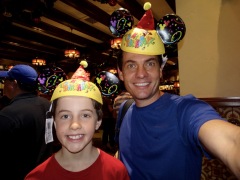 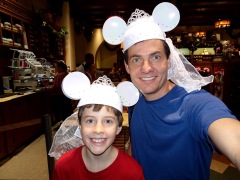 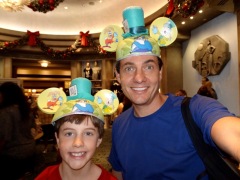 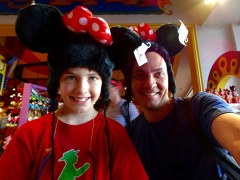 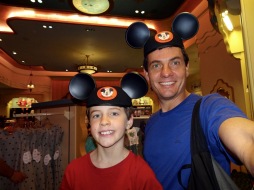 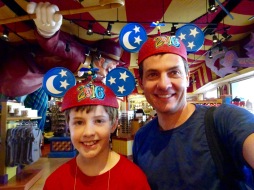 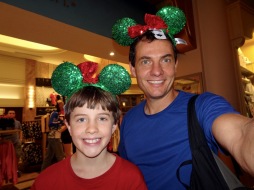 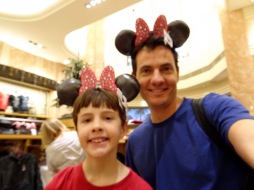 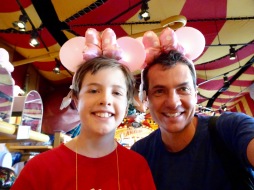 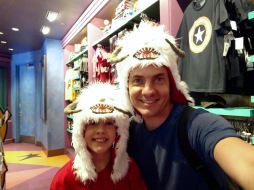 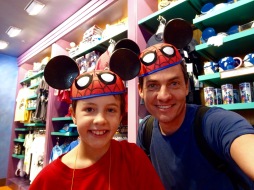 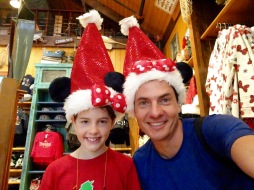 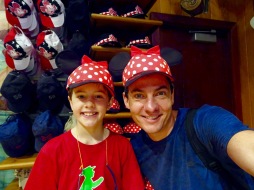 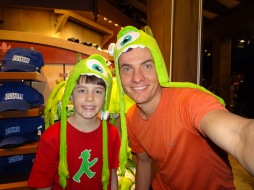 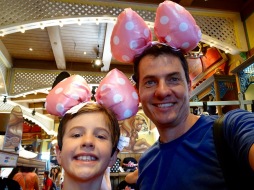 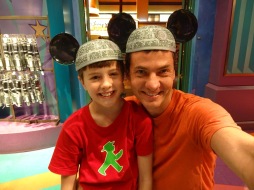 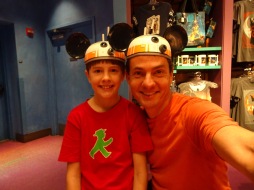 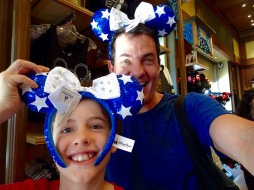 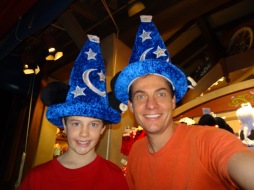 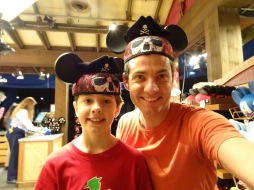 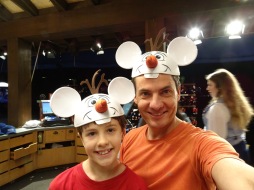 After three days we were done. We’d ridden everything we wanted to ride, worked out which Disney characters were most like us in the Disney equivalent of the Myer Briggs personality testing, been to two Disney character drawing workshops and even ‘talked turtle with Crush’ from finding Nemo.

Talking turtle with Crush was surprisingly fun. He came swimming up inside the animated version of a huge aquarium, with us as part of the audience looking into his world on the other side, before taking questions from ‘all the little dudes’. Crush held a 30-minute Q and A which was hilarious and worked so well I had to remind myself he was just a drawing.

Then we emerged back into the real world where Donald Trump was and still is I suppose, President elect.

Before our adventures in Disney we spent a week just hanging out back in Las Vegas. We had given ourselves an extra week in the US after dropping the motorhome off to take in a few more National Parks. On our ‘to see’ list were places like Monument Valley, Arches and several other national parks, but by the time we had finished touring around in the motorhome our desire to hit the road again was oh so low.

Instead we rented a house in the suburbs and did… not much. Emma and I went running. We sat around reading books which Amy and Oliver interspersed with watching episodes of Britain’s Got Talent on YouTube. Oliver and I often just sat on the floor in the lounge room and belted this big blue ball he and Amy had found somewhere back and forward between us – you know playing, like the ten-year-old he is and I used to be.

The suburbs of Las Vegas are a far cry from the Las Vegas you may have visited and no doubt would have seen or heard about. It is quiet and clean, with huge freeways that seemed to have ample room for the abundant cars. Our house was inside a gated community, surrounded by other gated communities, but I’m really not sure why they bothered. If you wanted to get in you only had to wait two minutes for someone to pull up and then follow them through, but the whole place felt safe as houses really.

We did go out. We took two trips down to the Strip for a look around and we sought out all the free entertainment on offer by the various hotels and casinos. The dancing fountain show at the Bellagio, all choreographed to music, was impressive. The animatronic battle between gods at Caesar’s Palace was underwhelming, but the exploding volcano at the Mirage was worth a stop. I didn’t know what to make of the life size canal running through the Venetian with gondolas plying the waters to transport guests around the hotel which was so big we got a bit lost.

We did enjoy the four floors of M&M World for a while and the hallways of Caesar’s Palace had some cool artwork which we may have bought if Emma was better at roulette. Actually she didn’t even play and neither did I. That just wasn’t going to happen.

Crazy place the Strip. It was bright (stunning insight I know) and it was dazzling (another knockout observation) but I didn’t get the buzz I got when I visited during my university days. The gambling areas through which we were obliged to trek in search of the sights stunk of smoke and we couldn’t get out of them fast enough.

We also took a couple of trips out to the nearby Red Rock Canyon where we scrambled up and down rocks which was much more our thing. It was fun, and a pretty piece of desert with an awesome band of uplifted red rock. I was also having fun, much to everyone else’s chagrin, with the nippy little Chevy we were upgraded to because the car rental mob ran out of compacts.

Despite the lights, the volcanos and the canyons Las Vegas marked something of a turning point for us in this trip. Maybe it was the abundance of spare time that comes with sitting still rather than being on the move, but Emma and I found ourselves thinking increasingly of home. My feet felt less itchy and Emma seemed more engaged in investigating options for where to get a new puppy when we get home than seeing the sights.

From Las Vegas we flew to Los Angeles to go to Mouse Land, but we’ve already covered that…