We weren’t sure we could fill 5 days in Derby and before we arrived we had been plotting where else we could go for a few days before our booking in Broome. As it turns out, we’re still here on day 5 and have had no trouble filling our days. I’m writing this blog from the Derby Memorial Swimming Pool. This is our third visit. It’s a 25m pool, water park, playground and kids pool… And we are currently one of two families here. The locals think it is too cold at this time of year…. Hmmm it’s 33 degrees outside?! Speaking of the temperature, it’s great for drying washing, there is a slight breeze which helps too. But this, combined with the 12 industrial sized hills hoists was not enough for some people I met at the laundry today. They were one their way to the office to get another $3 for the dryer… That would be $3 for the washing and $6 for the dryer! And they were complaining it was taking a long time… I kept my mouth shut. 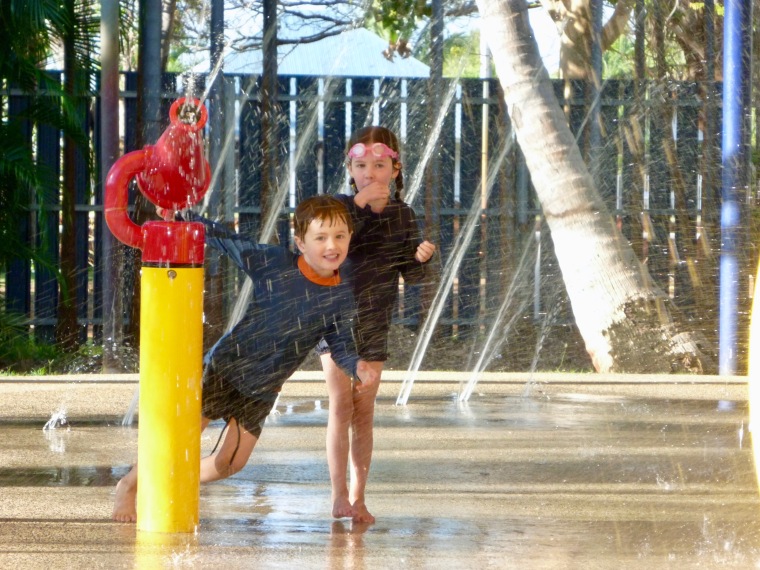 The Derby Rodeo was the big event on in town this weekend. I heard entries were down a bit this year due to the ‘cattle situation’ I suspect this is to do with banning of live exports? Regardless there were some 14 stations represented and a few entrants from NZ (not sure why they snuck in). We got there as it started on Sunday morning and found a seat in the stands in the shade… Perfect. The first event was the beginner barrels. Some of the steering was far from subtle, but these were riders new to it and the horses coped admirably. The sand/red dirt was really deep especially around the barrels making it hard going and a bit hairy on the tight turns. Later in the day we saw the open event and wow, they were fast and accurate. Next was the steer undecorating… The steers were decorated with a ribbon on their back. The riders job was to pull it off as the steer was released from the chute. Success was hard to come by, and usually it was all over in less than 5 seconds. And then, probably the crowd favorite, was the steer riding. There were 6 chutes continuously loaded and what seemed a never ending supply of willing riders. A few good rides and lots of very short ones!

Both kids sat all morning watching intently. Oliver was keen to buy a stock whip from the trade stands after watching a few young boys successfully cracking them. Fortunately we managed to avert that sure disaster.

We visited the boab prison tree. In the 1900s it was used to hold mostly aboriginal prisoners who had been ’rounded up’ for their crimes? Although the term crime seems highly dubious under the circumstances. The ‘crime’ if there was one, was hunting the white mans cattle. It didn’t seem to bother those passing judgement that the aboriginal people had been forced from their land and that their source of food had been denied to them. It also seems it was appropriate to round up whole communities for the crime. The tree was also used to hold aborigines rounded up by the ‘blackbirders’. You see the pearl shell industry based around Broome thrived on aboriginal labour and every pearling season began with a hunting party, for want of a better term, heading out to gather indigenous laborers. They held them in the prison tree on their way back to Broome.

The tree was apparently also used during WWII as a store house. It has a girth of 14.7m and is thought to be about 1500 yrs old. We have really loved the boab trees we’ve been seeing along the way, though this one really struck us as a sad place. The way the aboriginal people were treated was abominable. It was a similar story when we visited the old Derby Gaol which was only closed in 1975. Aboriginal people chained together by the neck and kept in bare concrete cells open to the elements for up to 6 months at a time. It was a place I didn’t want to stay long.

On a lighter note we did a day trip out to see some more of the ancient Devonian Reef we had seen at Geikie Gorge. It was approx 180km each way with with about 80kms on dirt. We didn’t take this lightly. After our last bone shaking off road adventure we asked around a lot before deciding we’d give this a go. The majority agreed we’d be ok in our 2WD. Greg planned for all contingencies… Packing vast amounts of drinking water, the tool kit, a jerry can of fuel, and even reading the car manual on how to access the spare tyre (we’ve never had cause to use it).

First stop was Windjana Gorge. Another beautiful gorge, spectacular cliff faces and lots of fresh water crocs lining the waters edge. These guys seemed used to people and allowed us to walk within metres of them to take photos.

Second stop Tunnel Creek. After a picnic lunch in the shade of the rocks, we donned our swimwear and head torches and entered the tunnel carved out over thousands of years by the creek. According to the literature the tunnel is 750m long, up to 12m high and 15m wide in places and at this time of the year the water inside is waist deep at the deepest point. And it is really quite dark! We took the kids two head torches and our little LED torch all of which could scarcely force back the black. We teamed up with some fellow creek walkers for the journey back to the beginning, they had a spot light the size of a dinner plate! Much better and we saw waterfalls and other stuff we never would have known was there. Five species of bats inhabit the cave and we heard a few and spotted some with our torches. Some other people spotted 3 crocs in the tunnel… We couldn’t see them… Which can only mean they were in the water with us!! So we’ve graduated from canoeing with crocs to swimming with them. Greg says next week he plans to pucker-up with a saltie.

The kids slept most of the way home. The road was fine and no contingencies were required. Phew!

We’re off to Broome tomorrow. Looking forward to some beach time! 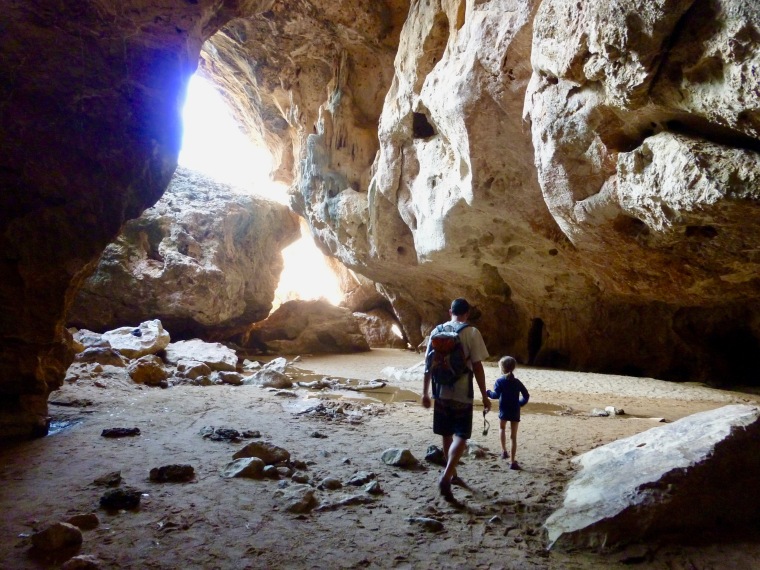