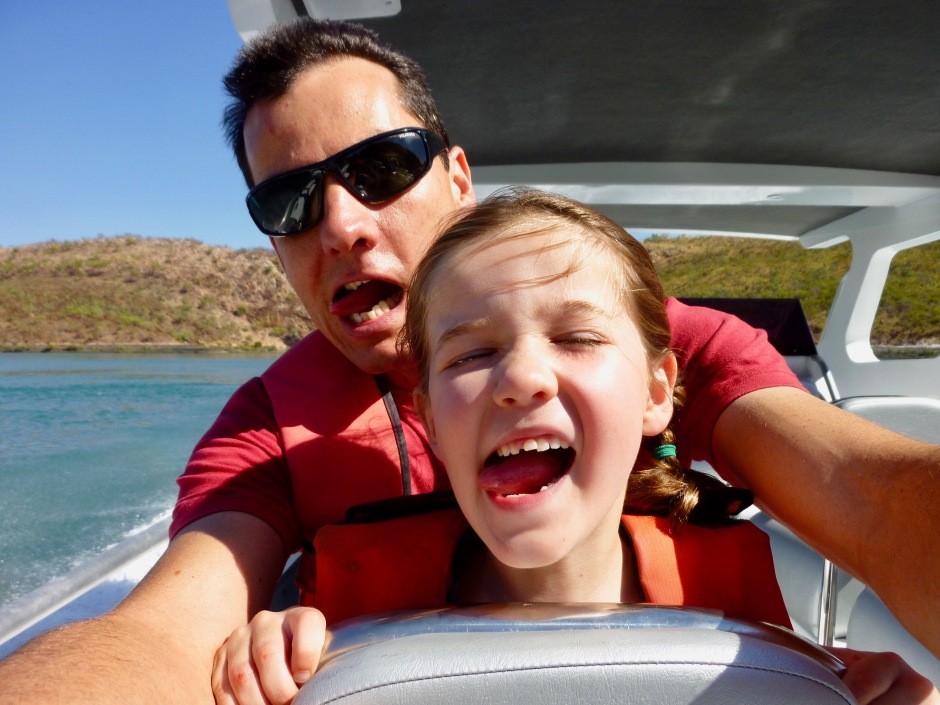 ‘Watch your step as you get off the plane. We have a couple of pets down there, and they bite’. No kidding. As we stepped off the seaplane and onto the pontoon three or four unmistakably sharkish shapes could be seen swimming just below the surface. We were in Talbot Bay, the water was blue and clear and all around us the reddish cliffs and hills of the Buccaneer Archipelago stood. The seaplane was tethered to a little complex of pontoons; a floating hotel, harbor and picnic spot. Two sleek looking boats with both with twin ‘V6’ engines the size of wheelie bins stood at the ready, one slightly larger than the other. 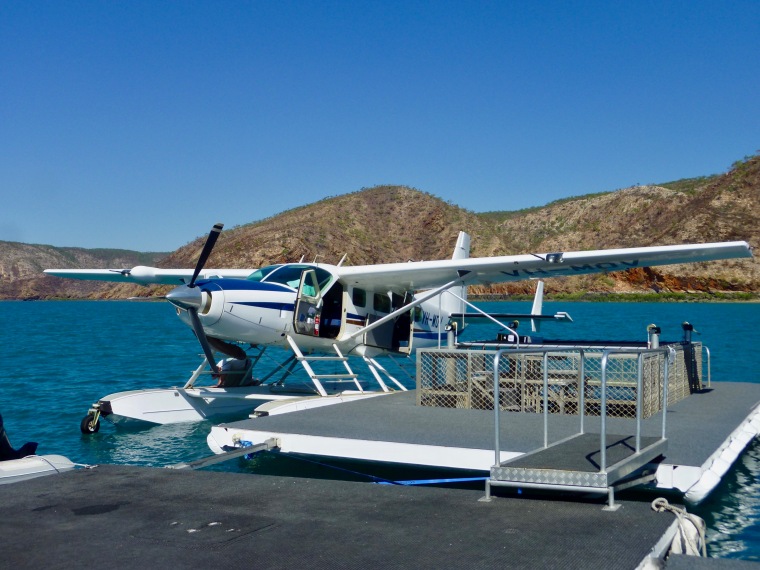 No mucking about, the tide was right and our skipper wanted to get us out through the falls before that changed, so we donned life vests and boarded the larger of the two vessels. As the throttles were pushed the boat shot effortlessly forward and we were whipping our way towards the horizontal falls.

A gap in two cliffs appeared as we rounded a corner, the first of two ‘pinch gaps’ appeared. This one 20 meters wide. Massive tidal movements with differences of up to 10m, according to the literature, cause the water to build faster on one side of the gap than the other, resulting in a ‘horizontal waterfall’. The gaps are the only way in or out of the bays, and the depth of each is approx 50m. We shot through the first fall and on to the second, this one much narrower but with the same volume of water pouring through. The difference in height was just shy of a metre from one side to the other and about as great as it can be before safety dictates that thou shall not pass. One metre, while very cool, is tiny. On a king tide the difference in the height of the water from one side to the other can be five meters!

We went through before the boat was expertly maneuvered back through the fall backwards! He throttled up in the middle and kept it right between the cliffs, the water traveling at 30 km per hour beneath the boat. This will double on a king tide. 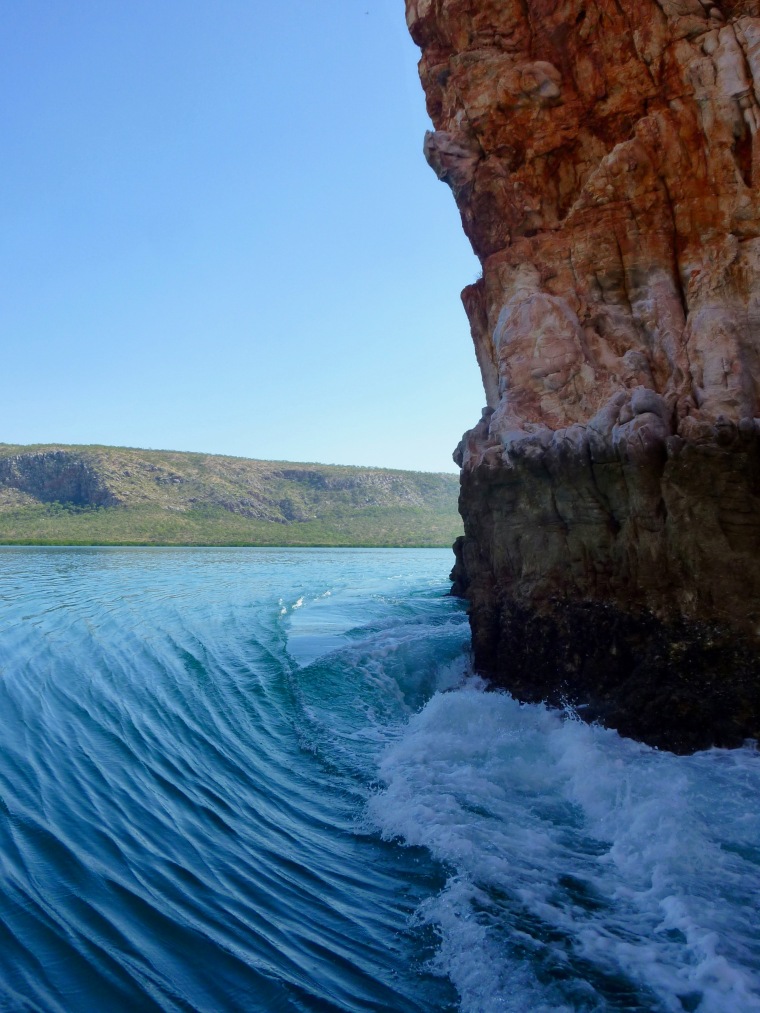 We left the falls after our first run and returned to the pontoon complex for a bite of barra cooked on the BBQ. But not before a quick dip in the shark cage to say hello to the toothy pets close up and to have a chat with Gordon the groper.

The most unusual event of the day occurred during our second spin with those twin V6 engines. We cruised up a side creek to where the skipper lived and where he had truly befriended the local fish. Seriously, he lent off the back of the boat beside his pontoon home (like something out of the movie Waterworld) and picked a large bat fish out of the water, patted it like a cat, fed it bread and popped it back in the water! Strangest thing I’ve ever seen.

Pics of the magnificent flight across the archipelago below as well. Impossible to describe in words. Sorry for posting so many photos but we took just shy of 200 on the day, so this is the edited version! 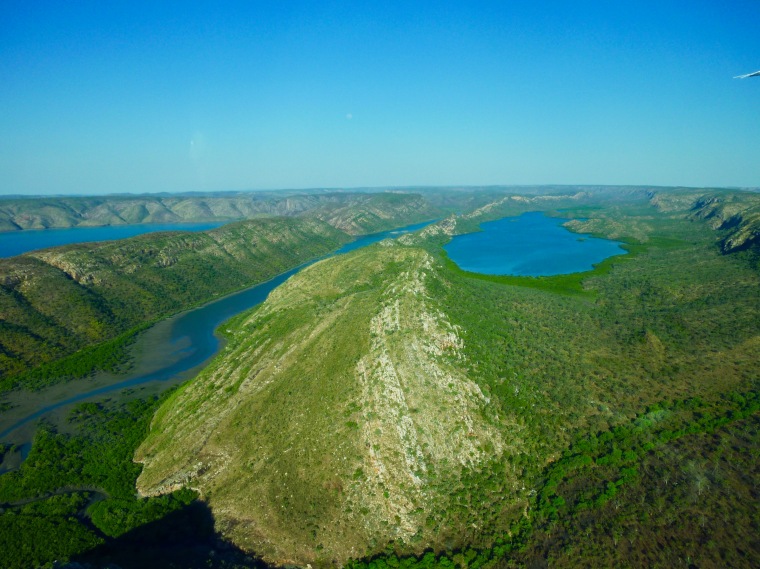 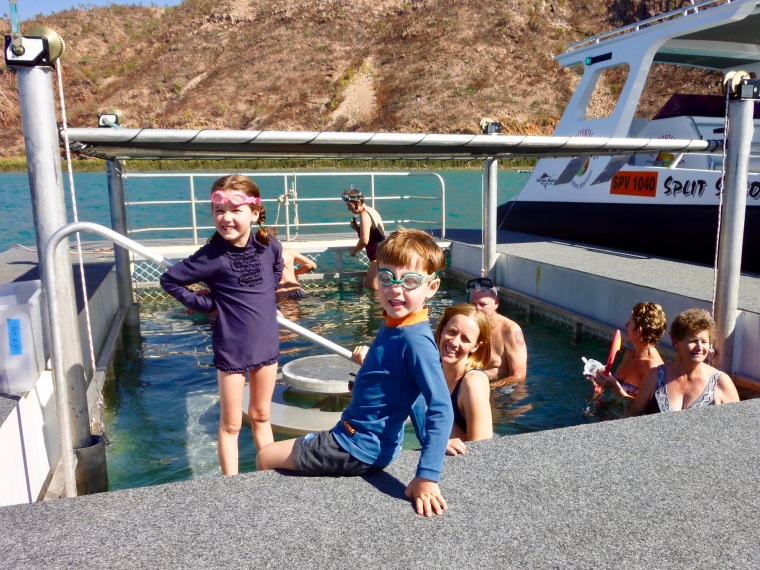 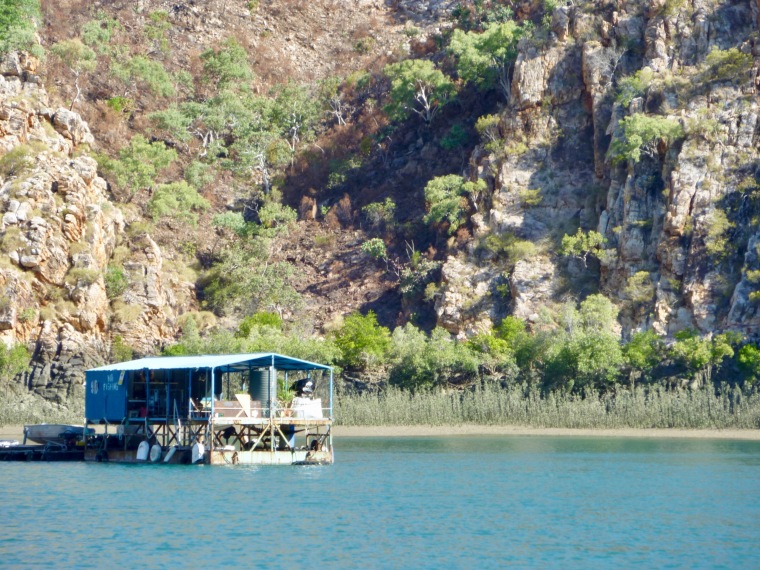