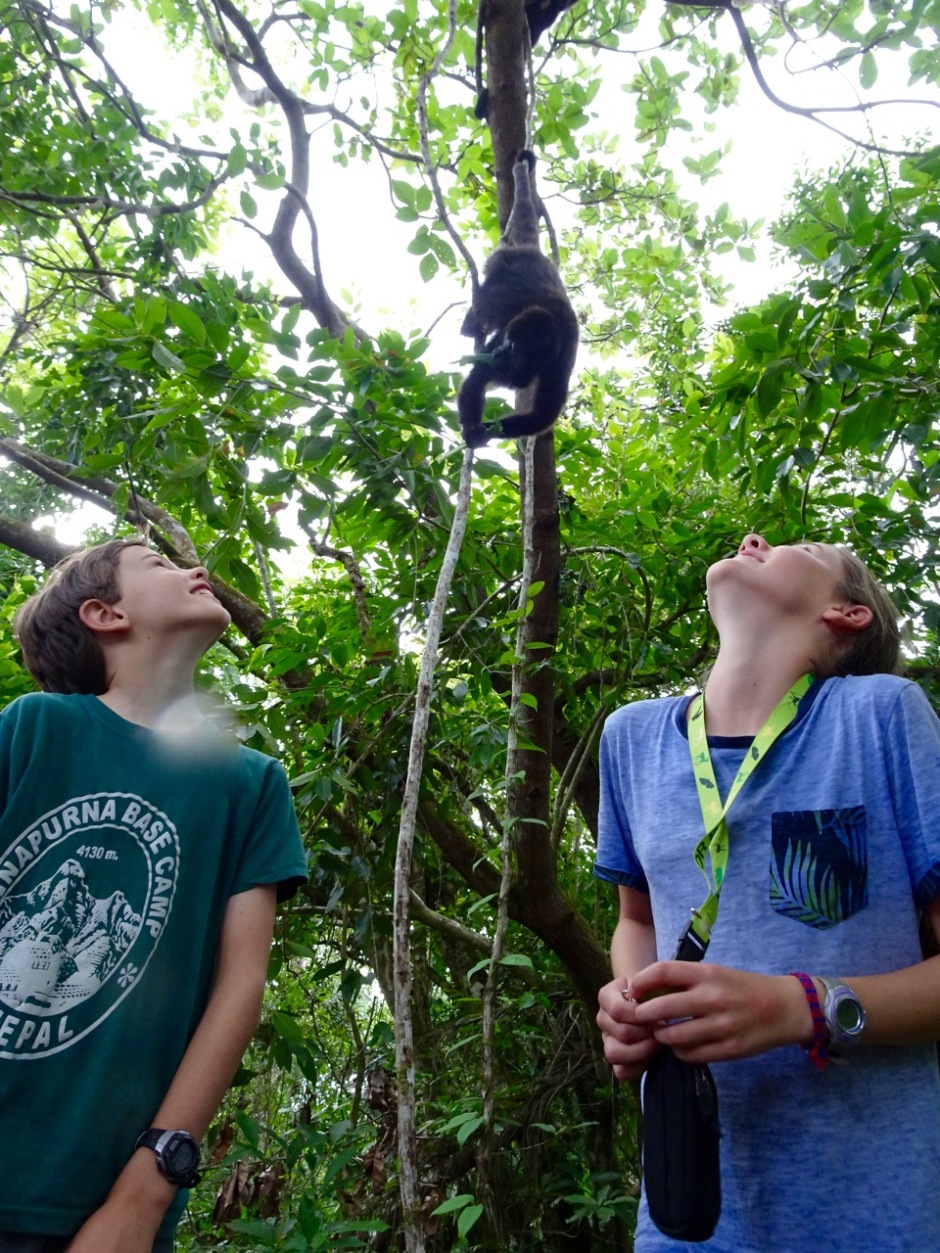 Oooh a humming bird. I love hummingbirds and there was a humming bird humming just metres from our veranda, wings whizzing, body motionless, altitude precisely maintained. It was in the thick of a bunch of bright orange flowers, dipping its beak into the nectar like a pig in mud, only graceful and colourful (so nothing like a pig in mud).

I would have run for my camera, but I figured as it was there just as we arrived it must be there all the time. I’ll get it next time I thought to myself. The hummingbird was a resident of the Howler Monkey Resort at which we had just become guests, although resort is a bit of a stretch. More like six or seven ramshackle cottages in the jungle on a bend in the Belize River out where few other than locals venture.

How do we end up in such places? It was quiet. Really quiet. There were no other guests and as we had been picked up from the airport we had no transport. We’d booked in for three nights and I wondered what we were going to do? There was a dart board in the dining area. Maybe we could play darts…

We did play darts later that afternoon because it started raining, heavily. I cast my eyes around for the hummingbird as Oliver and I made our way to the dart board, but alas there were none to be seen. A post darts stroll through the grounds did however reveal many other jungle wonders.

There was an iguana perched in the branch of a tree just near our doorway, and another bigger and orange iguana perched higher in another tree across the river along with a troop of Howler monkeys. On the other side of the grounds I spotted a tapir scurrying back and forward through the scrub before a magnificent red headed woodpecker spun me back around the other way with its knock, knock, knocking on wood. Other birds too numerous and beyond me to name flitted here and there and leaf cutter ants scurried along their way carrying their oversize burden. Everywhere I looked there was something new to see.

They are abundant here, because the Howler Monkey Resort is part of the Community Baboon Sanctuary – a voluntary local landowner agreement covering a strip of high value Howler monkey habitat about 25 miles long and I don’t know how many miles wide. 90% of landowners have signed up, agreeing not to clear any more of their land and to keep providing habitat for the howlers.

Bravo we say! We like that and to show our support the next day we visited howler monkey HQ (the visitor centre) where we signed up spontaneously for a guided canoe trip down the Belize River. The proceeds of the exercise go to support the members of the sanctuary project. Just like the Howler Resort we were the only ones there and the fellow behind the desk looked frighted when we first wandered in. We weren’t off a cruise ship and I guess we just weren’t expected.

We sat outside and waited while phone calls were made and guides were rustled up. Two fellows arrived a short while later in what they laughingly referred to, in thick Caribbean accents, as their 2016 model Jeep. It was a Jeep, but a 2016 model it was not. It was a hunk of Belizean junk. Most Belizeans would call it a ‘whip’ they explained, code for crappy old car. ‘Next year…’ they said, ‘it will be a bucket’ or really crappy old car.

We drove a short way down a straight road. The steering wheel was 90 degrees off centre but fortunately this did not have the usual effect. Canoes were then unloaded before we were loaded into them and the swirls and eddies of the Belize River swept us away (like Marlow in Heart of Darkness).

It was a wildlife tour that left Emma and I longing for a trip to the Amazon. This was a very jungly jungle and for a little over an hour we were guided downstream while Robert and Cade pointed out curiosities too numerous to name but which included a crocodile, more howler monkeys, bats, colourful butterflies, toucans (super cool), orioles, ibis, egrets, great blue herrons, swallows, kingfishers and the most amazing, orange iguanas you’ll ever see.

The orange iguanas are actually Green iguanas, naturally, given the males are orange and the females are grey. Green, orange or grey, they were snazzy critters, like a tiger in a goanna’s body and sporting a super punk mohawk. They mostly seemed to hang out in the trees, often with the monkeys, although they were also to be spotted lazing about on the river edge.

Oliver, who was sharing my canoe kept saying ‘look a hummingbird’ when of course there was no hummingbird to be found and I fell for it. Sometimes that child is evil. Following another ride in the ‘whip’ we retired to the ‘resort’ where he tricked me again with another ‘look there’s the hummingbird’.

We went back to the Community Baboon Sanctuary again the next day, because there weren’t a lot of options and because their nature walk activity promised a close encounter with the howler monkeys which were little more than black lumps in the tree tops from our canoes. The same fellow at the desk who looked like he could scarcely believe we were there the day before repeated the performance and he still had no change to help facilitate settlement of the bill.

Robert soon showed up again with visiting relations in tow. No ride in the whip today though, just a short walk across the street and into the jungle where Robert sucked in an almighty breath of air, tensed himself from head to toe and let forth a cry for the ages, the cords in his neck straining taut beneath his skin and eyes bulging.

Almost instantly his bellow was returned with gusto from the forest. Although they couldn’t be seen, a troop of howler monkeys, for troop is apparently the relevant collective noun, was not too far off. We pushed on, only making it about another twenty steps when black shapes started descending from the canopy.

Robert disappeared to reappear a short while later with handfuls of coca leaves. As the monkeys climbed toward us, Robert directed Amy and Oliver, then Emma and I to stand beneath the vine upon which the monkeys clamoured. Claws pressed against our shoulders and arms as the howlers used us to get to Robert, leaving us grinning from ear to ear and me desperately trying to recall whether monkeys carry rabies and if so how we would remove ourselves from the situation without occasioning any biting or scratching.

We packed up the next morning having found plenty to do in the forest where there was seemingly so little to do. I headed out onto the veranda for that all important final sweep for forgotten items when a flutter off to the right drew my attention. It was the hummingbird. I called Emma in hushed tones, not daring to shift my gaze for fear that it would disappear the moment I looked away. Emma quietly handed me my camera which I pointed and snapped before it was gone and so were we.

One thought on “Humming and howling”