I’ll just spin around and look behind me… because maybe if do I’ll catch that shark sneaking up on me and save myself from certain death! Nope nothing there. More snorkeling. Ok here he comes, quick spin around again. Nope nothing. Ooh an octopus, ooh a, a, a… What is that colorful fish, look there’s a big one, ooh that coral is bright, is that a stingray over there?

These are but a few of the thoughts that drift through my head as I drift over the world’s longest fringing reef at Ningaloo. We are in Cape Range National Park and I love it! I probably sound like I love everything on this trip, but as yet, this place takes the cake. I cannot get enough of the colours here. Turquoise Bay by name, turquoise bay by nature. The sand is white and the water shifts between different shades of blue from light to dark with huge breakers crashing against the reef on the seaward side of the lagoon.

So flop yourself down on the edge of the water, pull on your snorkel and flippers and away you go. Ten meters off the shore and your floating over ‘bommies’ (big round corals) and all kinds of other coral with all manner of fish large and small just an arms length away. Mostly it’s just fascinating, an underwater wonderland. Occasionally I spot something which reminds me I don’t belong in here, like when I duck dived down to check out a particularly colorful fish and accidentally ventured a little too close to an octopus that didn’t appreciate the visit. He made known his displeasure by squirting ink at me! Not to mention the afore mentioned shark. I’ve only spotted one while being in the water but is that not enough? The brochures say that the sharks at Ningaloo are well fed and historically pose no threat to snorkellers… hmmm. Rather they suggest sighting a shark is a rare privilege. A privilege I could have done without perhaps. 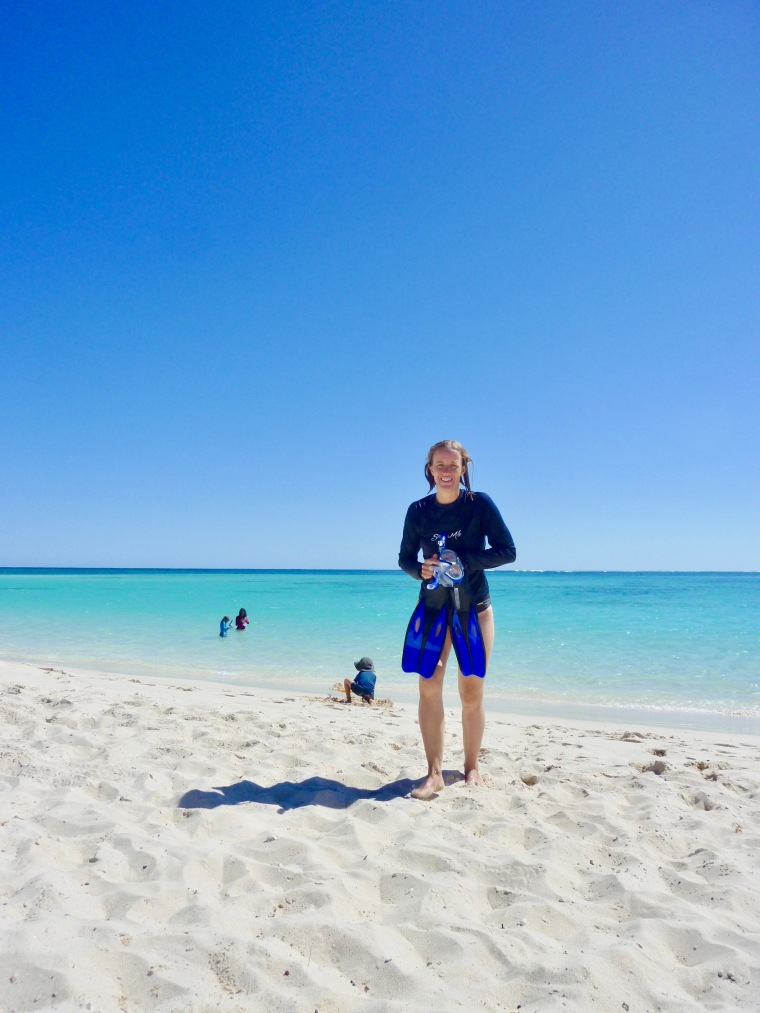 Perhaps not. Its not like we didn’t know they are around. The waters here are teeming with life. Oliver and I took a late afternoon stroll at our Tulki Beach camp ground one night and noticed a school of fish just in the shallows moving unusually fast. Then they started jumping out of the water as they went. Then we saw why as a much larger shadow whipped through the water in hot pursuit. Natural selection at work. I’m pretty sure the slowest fish didn’t make it! On another late evening we were marveling at the gorgeous scenery at Tuquoise Bay when somewhere out near those breakers humpback whales began to frolic and breach. At the same time a sea turtle kept appearing just offshore. We didn’t know where to look!

It’s almost as good on dry land. We were trekking in to one snorkel spot at a place called Lakeside and stumbled on to a couple of snakes coiled on top of each other. ‘What are they doing’, Emma mused. ‘I’m not sure’, I replied ‘but I think they ought to get a room’. There has also been lizards, emus, wallabies and my favorite water bird the Pied Oyster Catcher. I think Emma thinks I think every bird I see is a Pied Oyster Catcher.

Still it hasn’t all been snorkeling in a tropical wonderland. We’ve spent six nights out here in the wilderness without water. Well we have water but we had to bring all 117 litres with us. I think Emma thinks the Pied Oyster catchers might make a home in her hair soon, and she keeps threatening to cut it all off and start again. Yes a shower will be nice. It would also be nice if the pesky wind would just stay dropped. Seems to rear up out of nowhere and whistle past us all night. The days have been mixed. Still without the wind we may never have ventured out on our walk through the Mandu Mandu Gorge and been rewarded with it’s aerial view of the reef stretching away down the coast.

We have just two nights to go here before it’s off to the other end of Ningaloo at Coral Bay. Good thing the next stop will involve more snorkeling, just at the other end of the reef, otherwise I think that shower would just have to wait even longer. 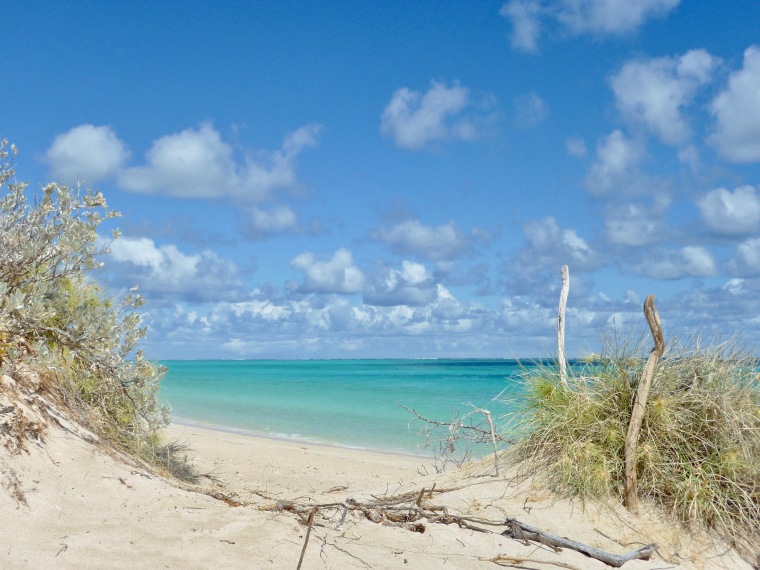 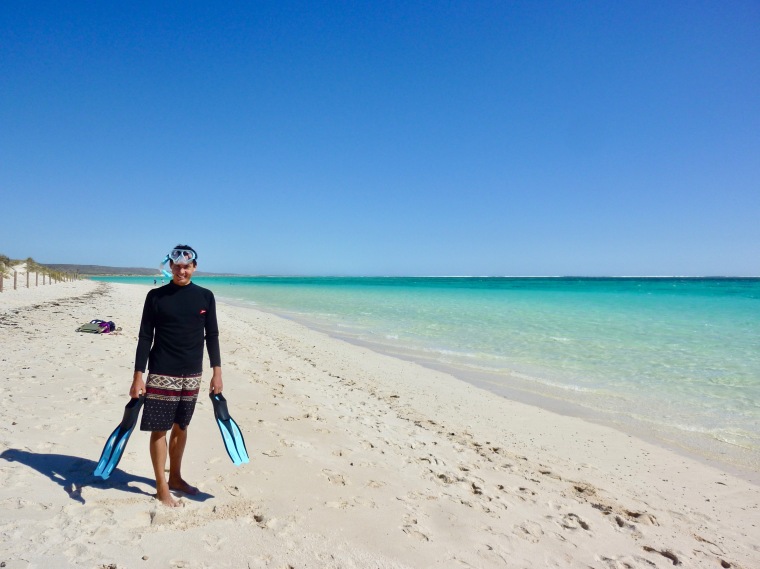 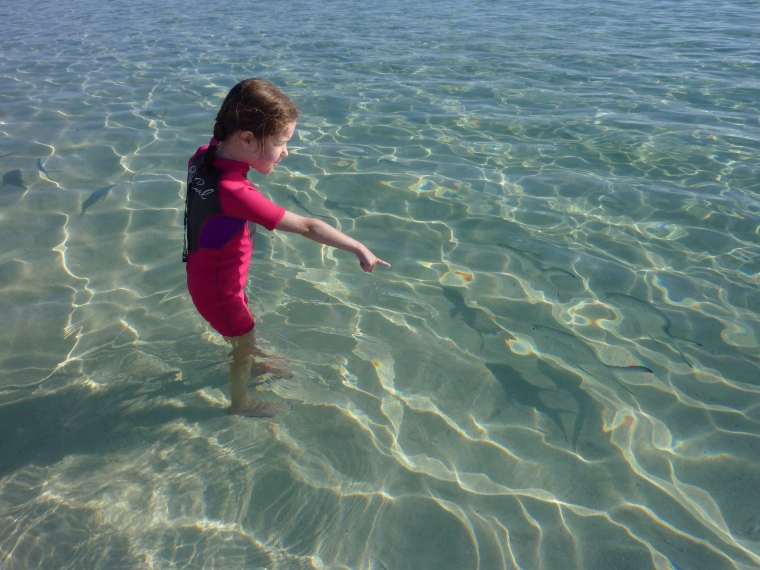