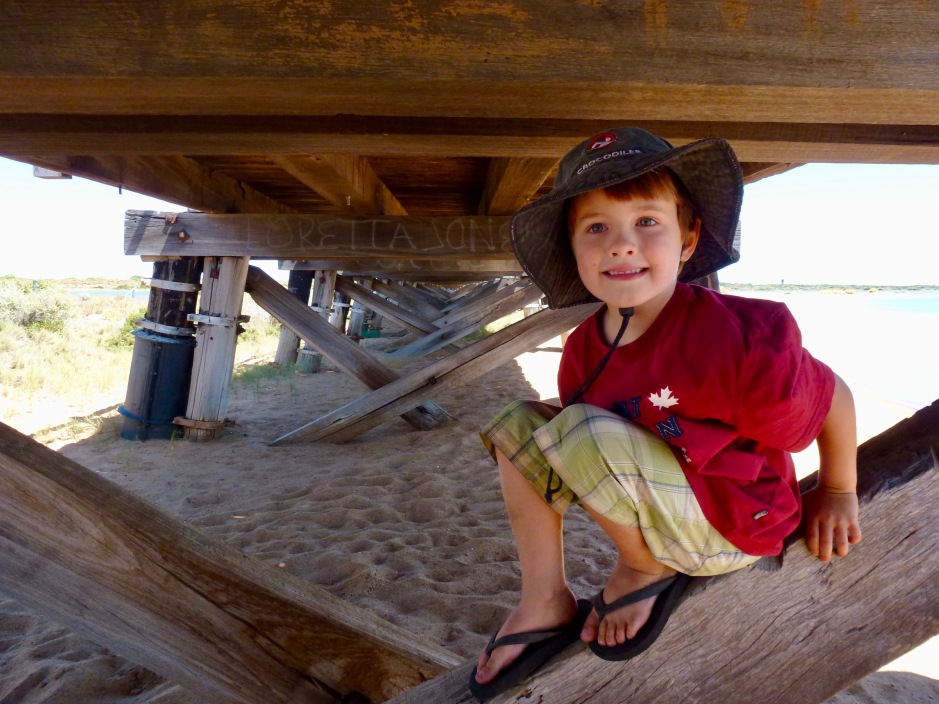 We were a little sad to leave Coral Bay, but there are so many more good places to visit. Next stop Carnarvon was especially good because we caught up with Grandpa Brucie and Irene and doubly exciting because they picked up a new camera for us and bought it over with them. No more spots in our photos!!

It was also good to temporarily return to suburban living as we parked our van in the backyard of Irene’s son Jason and his wife Kylie’s place. Amy and Oliver enjoyed playing with four year old Tommy and two year old Summer and all their toys. Greg enjoyed the access to a hose and ladder to wash the car and caravan while Amy and Oliver gave their bikes a going over as well. I got to cook a bit in a real kitchen – so much space! It was also nice to just talk with the other adults and find out about Carnarvon from the locals.

Agriculture is a big part of this town, with banana and manjo plantations lining the roads into town and all sorts of other crops as well. The Gascoyne River supplies the town with ample water, and mostly flows underground. A massive flood hit in December last year and some areas are still recovering. Jason told us about rescue helicopters dropping people off outside his plumbing business, Coral Coast Plumbing.

We bought our first bananas in a long time… Only $8/kg! We’ve had to manage the kids intake, left to their own devices they may have got through a bunch between them in a single day. Greg broke into a rendition of Day-O – ‘six foot, seven foot, eight foot bunch, daylight come and me wanna go home’ every time we went past a plantation which prompted us to download the song. Now the whole family joins in.

Fishing is also a major industry for the area. We drove around the wharf area and all the boats were in because it was a full moon. Some of them were humungous! Of course because the boats were in there wasn’t any fresh fish, so we had to make do with some tiger prawns. As we’ve said before it’s a tough life.

With Irene and Brucie we walked the length of One Mile Jetty, we enjoyed walking on the uneven sleepers next to the old railway line which had a small engine take passengers back and forth. The historical society was working hard to maintain it – a big task considering it’s length. 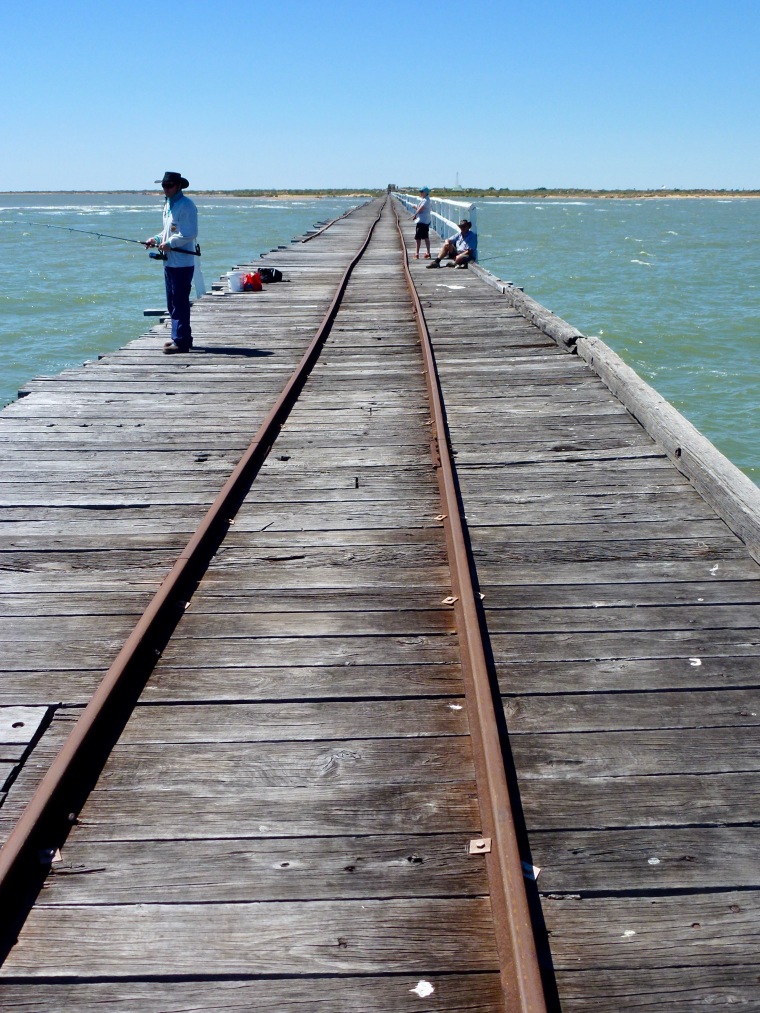 A visit to the Blowholes north of Carnarvon was definitely worthwhile. Not only was the blowhole blowing magnificently, there were heaps of whales out to sea. Some close to shore, lolling about, we could see their backs arching through the water. Just down the road was a little lagoon where we spent a lazy afternoon. Well I did at least. Greg snorkeled and walked with Grandpa Brucie and the kids to the point at the end of the beach multiple times. There were some good rocks to climb and the kids went up and down repeatedly. By all accounts the snorkeling was amazing, aquarium-like with many of the same fish as at Ningaloo and some new ones as well.

Local knowledge helped us arrive at the River Gums Cafe for lunch one day. Along with the lovely setting came great food and banana smoothies. There was a photo album of the recent floods and where we were sitting would have been up to our waists in water.

After stocking up, cleaning up and charging up, we said farewell to Jason, Kylie, Tommy and Summer. Tonight we’re at a free camp on our way to Kalbarri National Park wher we will meet up with Bruce and Irene again. I’m typing this sitting in front of the fire Greg and the kids built earlier. And it is cold enough to need a fire.