Never mind Nick the Informative Fisherman, we have Ian the Informative Grandfather Fisherman! What I like best about the Ian version is that he is so much more hands on than Nick. Ian drove all the way from Canberra to be with us for a start!

After meeting up with Ian in Port Lincoln I told him how much Amy, Oliver and I were looking forward to having an expert fisherman around. Ian’s reply… ‘oh alright let me know when one shows up’. Too modest, cause our fishing tally since his arrival has leapt from 1 rock cod to 3 king george whiting, 2 flathead and a tinsy weeny little flounder. Of course only one of these was large enough to keep and that poor fellow made for a very tasty entre. 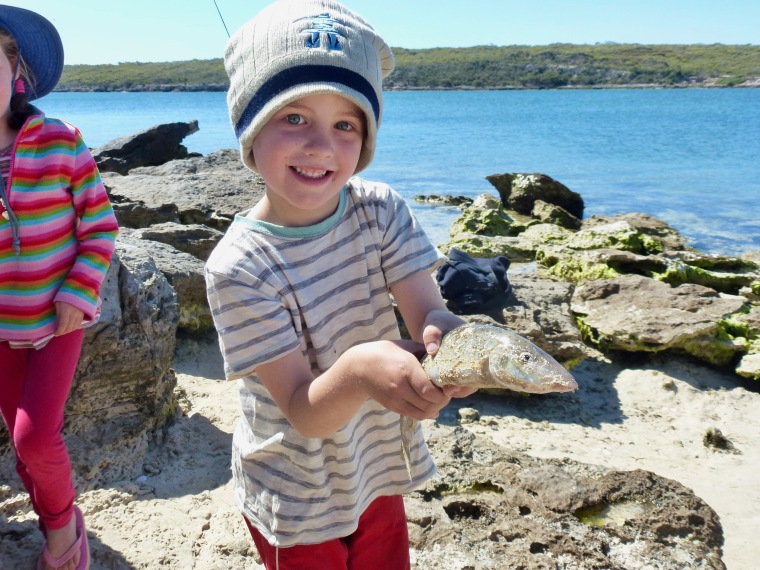 While spending three days in the sleepy town of Coffin Bay we spent quite a number of hours dangling a line. When we weren’t hauling in fish we were hauling in snags, seaweed fish (our most common catch) and untangling tangled lines. Amy even came to draw a distinction between a ‘grandpa tangle’ and one dear old dad could manage to sort out. If it was bad… Where’s grandpa?

With Ian about we didn’t even have to fork out for bait. During a visit to Almonta Beach at the local National Park Ian had us all doing the pippi twist. Fortunately for us the closed season on Pippis ended the day before! The National Park also had some very scenic lookouts.

Coffin Bay itself seems to be mostly made up of holiday houses and lots of them. When we first arrived we looked everywhere for a supermarket, which from our experience a town this size should have. But alas, there only existed two very small corner stores. It seems resident population must drive 45 kms each way to Port Lincoln to stock up. Either that or they survive on Coffin Bay oysters.

So for three days we filled our bellies with fish and oysters (the vast majority of which were caught not by us but by the biggest fishing fleet in the southern hemisphere) and some groceries from Port Lincoln, before deciding it was time to move on. We overnighted in Whyalla and although we enjoyed watching the kite surfers at play found little else to hold our attention. The Clare Valley was calling us.