Holy hell what do I do now? There’s only one thing in that ocean that could bend Oliver’s fishing rod like that (other than the two whales lolling about 25 metres off the rocks we are standing upon while a lazy swell drifts backwards and forwards). It’s got to be a fish. Amy’s gone and caught a fish! That was unexpected. But, but, but… I still haven’t watched the relevant episode of ‘Nick the informative fisherman’ where he tells me what to do once you actually catch a fish. 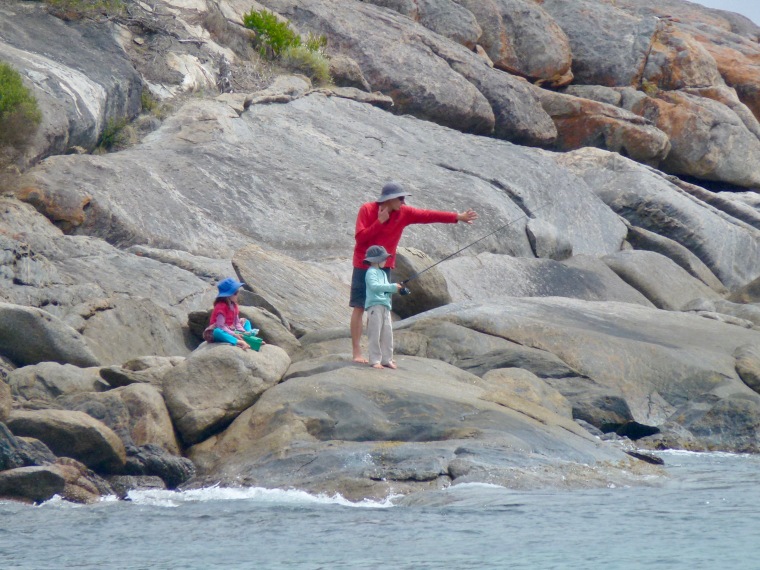 I watch in vain hope, as Amy excitedly wrestles with her haul, that whatever it is on the other end of the line will free itself before I have to. But alas I hope to no avail, there’s a fish on the line and it does not possess the opposing thumb necessary for the task. It’s a mottled green and brown looking character with big googley eyes over what looks to my inexperienced eyes like a groper’s mouth. It has broad spikey fins on its side and a huge top fin with more spikes than an echidna.

Ok, ok, don’t panic… Think it through. The rag you put in the car to help deal with this scenario is…still in the car. That’s ok. An image flashed in my mind from my youth of dad holding a fish down under his thong while prising the fish hook loose. But that wasn’t going to be possible either my because my thongs were on the beach next to where Emma was sitting reading a book. That’s ok.

‘Oliver pass me the needle nose pliers from the tackle box!’. Nick the informative fisherman had mentioned they were very useful and so I had thrown them in. Oliver leapt to it and was back by my side in no time. No doubt with complete confidence I knew exactly what I was doing.

Amy passed me the line and I hauled the fish out of the water where it dangled helplessly from the end of the line. Taking the needle nose pliers I grabbed the hook without touching the spiny fish and twisted the hook backwards. The weight of our 6 ft monster (well it is a fishing tale) was enough to pop the barb free and it fell back into the water and away to it’s home under the rock ledge wishing it had never got out of the seaweed that morning.

Triumphantly Amy, Oliver and I danced around the rocks celebrating our great fishing success. Who needs Nick the informative fisherman anyway.

15 minutes later it was on again. Oliver, who had been casting unassisted like a pro, mistimed one and sent the line into a crevice just below us. As he reeled it in one of the local crabs had decided squid (our preferred bait) was just the ticket. Panic began to set in again as my mind immediately began to grapple with how to joust with a crab. Fortunately it seems crabs are unaccustomed to altitude and the squid was set free before I could intervene. ‘Dad I caught a crab!’ called an excited Oliver.

Little Boat Harbour is at the bottom of the peninsula below Bremer Bay and was the site of our fishing mission. Gorgeous spot with a pristine little beach nestled deep between two granite headlands. It was sheltered from the prevailing winds and the whales in the steely light blue water were icing on the cake.

The population of Bremer Bay swells to 4000 during peak season, but for our visit I think it was just us and the guy next door. The van park was like a ghost town. We loved it. The kids swam on the shores of Bremer Bay itself, as did I on our second morning there after knocking off a quick 5 km in 22 mins.

Native Dog Beach was another unexpected joy. We took a lazy afternoon stroll along the white sands while the Southern Ocean swell through itself at the beach and surrounding granite rocks. There are just too many of these little gems in this part of the world and stumbling across them rather than seeking them out seems to add a certain something to the experience.

PS Emma says I need Nick the informative fisherman cause without him we wouldn’t have had the needle nose pliers on hand. She may have a point. 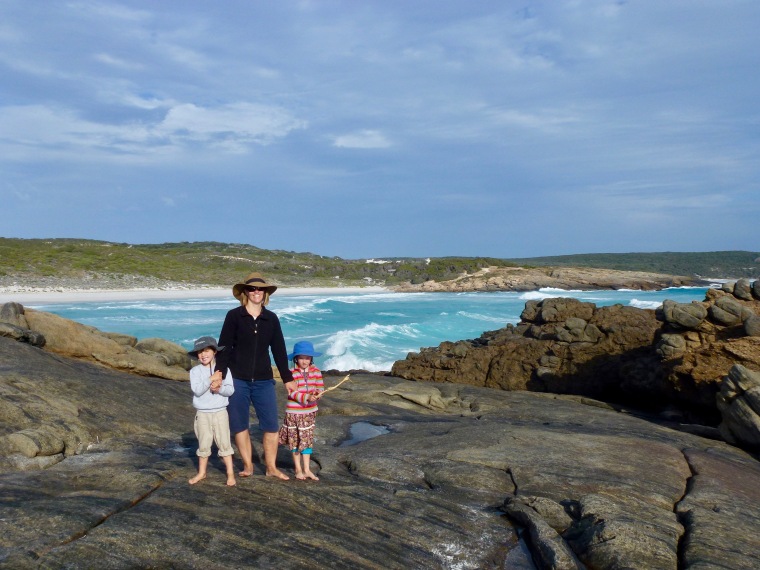