Emma here: “Oh, I’ve seen the colour changes from Albany to Broome”. I know we’ve actually gone from Broome to Albany but that is the line from a John Williamson song and Greg sings it every time Albany is mentioned!! I’m so thankful we have now been to Albany and we can stop talking about it, so we don’t have to endure him singing anymore. It’s not just me, the kids now tell him to stop too!

Greg here: The funny thing is I’d never listened to a word John Williamson had sung until this trip. It seems we had inherited an album of his along with a range of other music and Emma, in a quest for something different to listen to, put it on somewhere on the road between Katherine and Kunnunurra. The music just seemed to make sense while traversing the country about which it was written and as it was about the sights from Albany to Broome it kind of got stuck in my head. I don’t understand why my singing is not better appreciated, after all being a pop star was my second career choice.

Besides which, the colours in Albany are different. White sand, clear blue water both dark and various shades of light blue, but distinctly different to the differing shades of blue in the waters further north. Anyway I suppose I ought to write a word or two about Albany. Albany… I really do have a lovely singing voice you know. Oh yes, Albany. There is heaps to see in Albany. I made something of a list from the very helpful tourist literature and of that we managed to see:

1) the Albany wind farm; which consist of twelve 65 metre tall towers topped with rotating power generators, each powered by three 35 metre long blades. They are impressive to stand beneath, whizzing around at a dizzying pace and giving off a fair ‘whoosh’ to boot. Apparently they provide 50% of the power needs of the 30,000 citizens of Albany. I was however unable to ascertain whether that means 100% of power needs, but only when the wind is blowing sufficiently (presumably under this scenario 50% of the time) or a steady 50% of total requirement 100% of the time. Surely I am not the only one to ponder such matters and this information ought to be included on the otherwise excellent interpretive signage. The signage did note that it is windy enough there to turn the blades on all but seven days of the year.

2) The Gap and Natural Bridge; are two impressive sights in the Torrindirup National Park which juts out into the Southern Ocean south of Albany. The sea was driven by strong winds on our visit forcing waves hard into the 30 metre deep ‘gap’ in the sea cliffs. The water would pound into the back of the Gap and send massive clouds of white water careening upwards. A good portion of this was then caught in an updraft created by the gale force winds creating showers of water which defied gravity. Of course gravity always wins and most of the salty water was deposited atop ours and every other car in the carpark.

3) the Argos; having interested ourselves in the blogs of other intrepid travellers Emma had, earlier in our trip, come across the blog of a family from Canberra about to set sail around the world and who happened to be making their final preparations in Albany. So we dropped them an email an effectively invited ourselves over for a chat. Peter and Sue were most hospitable and we spent a good three or so hours hearing all about their upcoming adventure. Amy had a small adventure of her own when she got locked in the toilet on the docks for a short while.

4) Porongerup National Park; is 40 km inland from Albany and one of Australia’s biodiversity hotspots. 1500 species of flowers grow in the small park surrounded by farmland. We trekked the three kilometre round trip to the granite outcrops at the summit of the Castle Rock trail surround by an absolute sea of flowers from start to finish. We dropped in at the Porongerup tea rooms afterwards starving hungry and were a little disappointed with the frozen pies we were served. The guinea pigs made up for it. Patting them that is, not eating them.

And a final word on Albany. I learnt a new skill. Having given Oliver a fishing rod for his birthday I had to pretty quickly learn how to fish. ‘Em, where does the hook go!’. A few episodes of ‘Nick the informative fisherman’ later (watched on our invaluable iPad) and I felt like Rex Hunt. Amy, Oliver and I stopped in for bait from the local tackle shop while Emma did the groceries. I took the rigged up rod with me just to check I’d got it right, got little more than a nod from the shop keeper, handed over $4.30 for squid bait and we were on our way to the Middleton beach jetty. No we didn’t catch anything (thank god, I haven’t watched Nick’s episode on how to get a fish off the hook yet!).

Oh yeah, and on the way to Albany we stopped off at Greens Pool. Hopefully our photos do it justice. 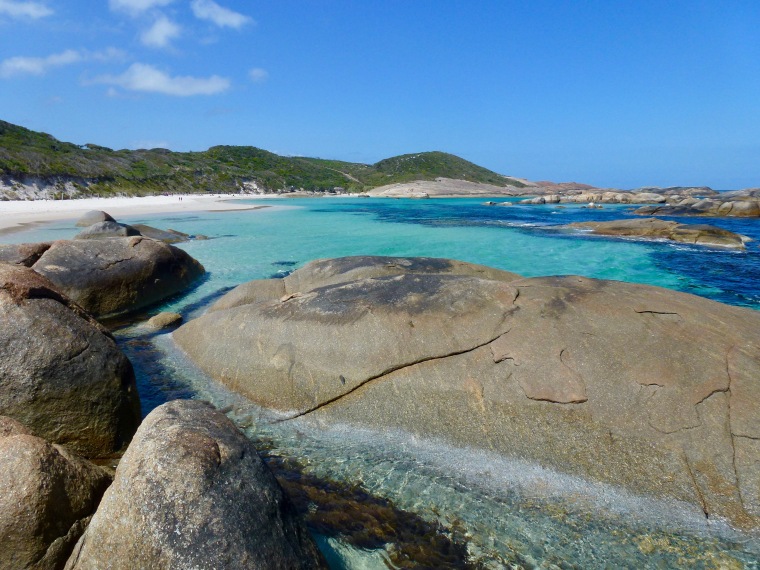