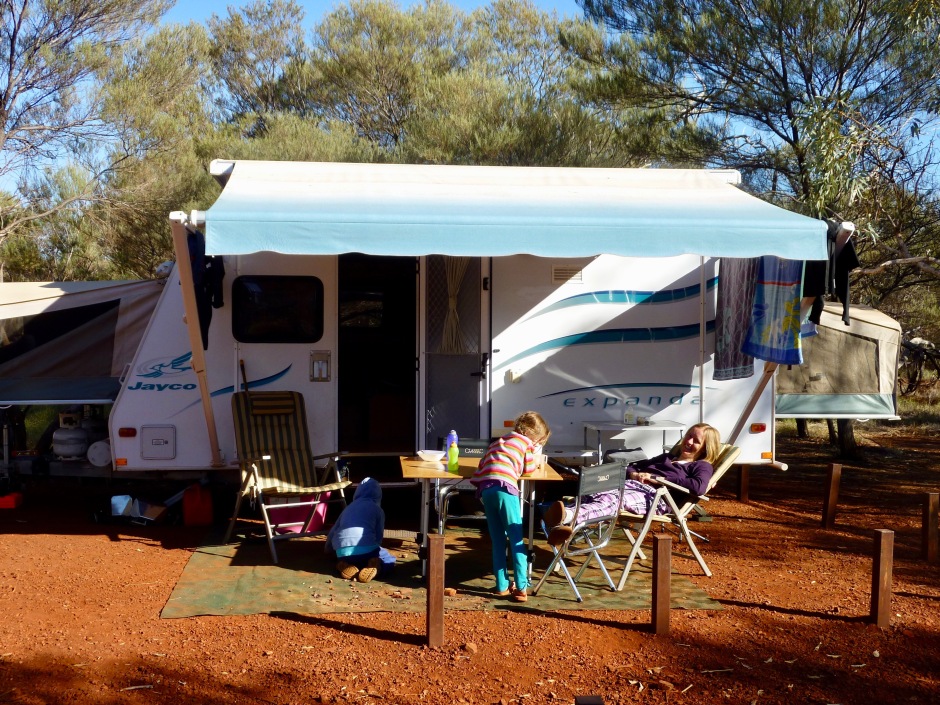 Before we embarked on this trip I had two concerns. Well three if you include my totally irrational fear that Amy and or Oliver would be consumed by a salt water crocodile, somewhere in the top end, while I wasn’t watching. The first was that the car simply wouldn’t make it and that we would be stranded somewhere, dying of thirst on the side of a desert highway while feebly trying to wave down passing road trains whose eyes simply were not open to the needs of those pesky caravans that slow them up all the time. The second was just how we would all go living on top of each other 24 hours a day seven days a week for five months! Numerous well meaning friends and colleagues had warned me about the dangers of committing to life in a caravan.

Well, with 3732 km of 16,000 km (plus side trips) still to go I’m starting to relax about the car. I think it’ll make it. Might even go a few more kms after we get home, although the seats and floor will never be the same again. They’ve taken on a much more earthy tone which even the strongest of Car Lovers vacuums won’t shift. We have gone through six tyres already (four car and two caravan) but other than that the old 2003 Falcon is proving a reliable workhorse. Its market value is probably next to nix, but every time it’s engine turns over to take us home from the day’s adventures it is worth squillions to me.

As for living on top of each other I am also pleased to report that this was to be an entirely unsubstantiated concern. In fact quite to the contrary, living all together 24/7 has been fantastic. Perhaps all kids develop rapidly at this age, but both Amy and Oliver have grown by the day in confidence and abilities while we have been away. They are venturing further afield more and more independently, crossing roads and avoiding other hazards more effectively, swinging, swimming and riding more competently, making friends and meeting new people more easily and living in almost constant wonder at the new creatures, landscapes and people that we have met along the way. Just last week they learnt to stand on their heads! We think it has to do with having so much more concentrated time dedicated to these activities than they would get during life at home.

It’s funny to hear them chat away to each other dropping names like Cape Leveque, Cable Beach, Leeuwin lighthouse and countless other places. They have their moments (don’t we all) but I can’t think of a single experience that hasn’t been the richer for having their reactions to observe in addition to whatever we actually set out to see.

As for Emma and I, I think we both knew we needed to get away from Canberra for a bit and this trip has helped to stoke our imaginations as to what the years ahead might or could hold. It’s the best thing we have done for ages and will live long in our memory. Having a vast and ever changing backyard just outside the caravan door helps avoid any concern about cabin fever and disappearing on your own for a run, a walk or to take photos up and down a beach ensures you can escape to regain your equilibrium if necessary.

The van itself is of course tiny by ‘home’ standards. But living happily in the space we have gets you thinking about how much space you really need. And is our pursuit of home improvements and the like back home driven by boredom? There’s a thought. I’ll have to mull on that now… One thing is for sure. Until you get out and about you just don’t know what you’re missing. I’ve come to like the tourism promotion, ‘No leave, no life’. How true.