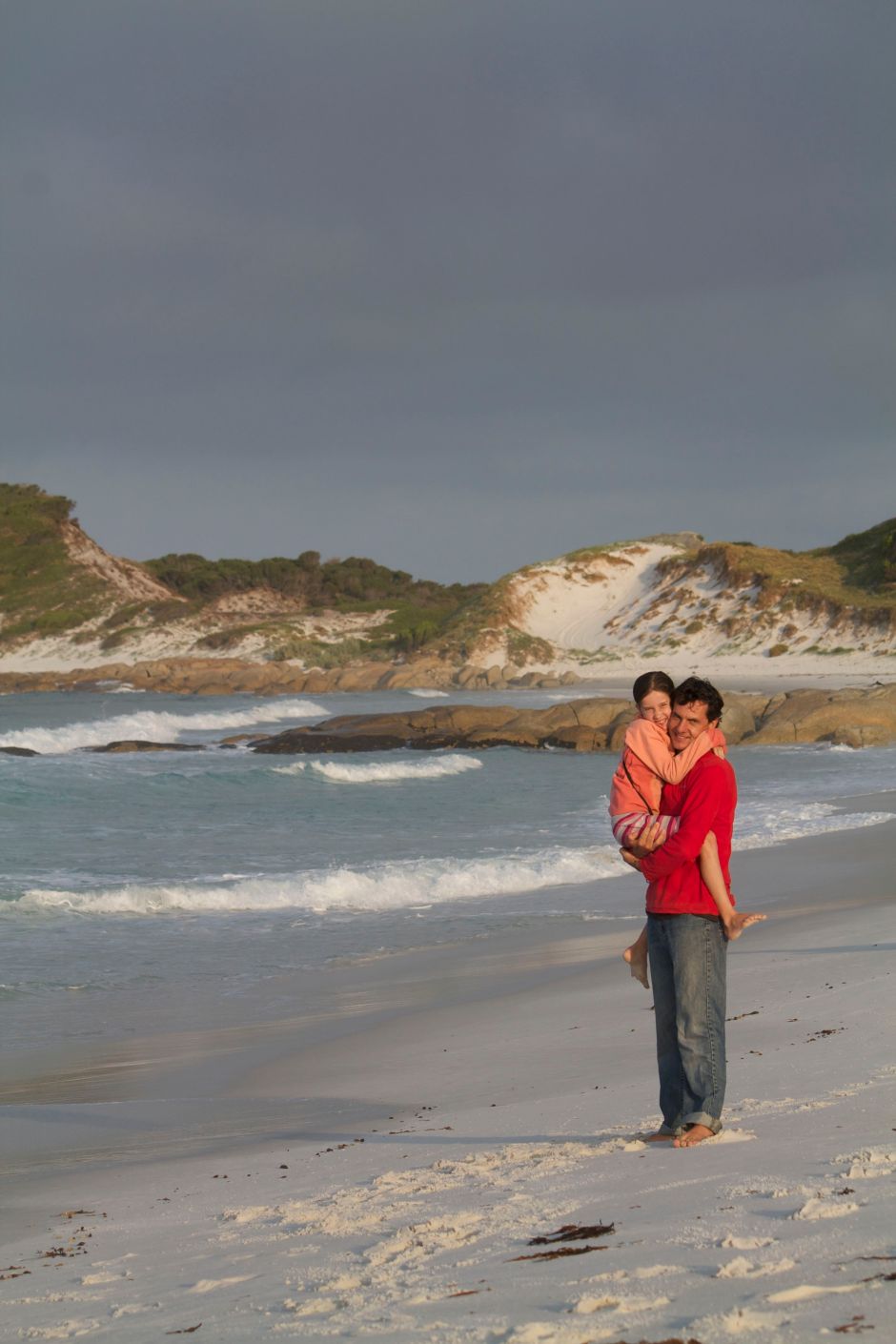 That’s it, it’s war! I peeked my head around a rock, caught Oliver’s eye and then with every muscle straining I screwed my face into the most grotesque look I could muster. Oliver looked away, but he knew I had him. Not even he could deny he had caught my dirty look. Now he was out for revenge, but I assiduously averted my eyes, determined not to catch a return look. So passed a gorgeous 7 km stroll along the beaches of Mt William National Park, ducking and weaving in and out of orange lichen covered boulders, strewn as they are amongst the white sandy shores.

Although Tassie is small and nothing can really be too remote, it certainly felt that way up in the northeast corner. Petrol lept from $1.57 at Scottsdale, to $1.81 in the tiny town of Gladstone just outside the National Park. We plonked ourselves down in ‘Stumpy’s campground number 4’ (don’t ask me why its called Stumpy’s), and settled in for a few days stay. It was just us, the pademelons and the Forester Kangaroo’s (Tasmania’s version of the eastern grey, but oddly enough only found in this neck of the woods).

Mt William is at the top end of the Bay of Fires, known for its turquoise waters, white beaches and granite boulders coated with fiery orange lichen. Whoever built this place sure had a good eye for the colour pallet. It’s one of those places where really a picture is worth a thousand words. Although I understand it’s packed in holiday season, we pretty much had the place to ourselves. One of the advantages of getting out of step with the rest of the world I suppose.

Mt William National Park was an important part of our quest to knock off as many of the walks in the book ‘100 Walks in Tasmania’ that Grandpa Ian challenged us with. We climbed Mt William on a grey and overcast day and we walked 7 km along the beach to Cobbler Rocks on a day of glorious sunshine. The Cobbler walk was one of those that warm the cockles of my heart. For reasons unknown all seems right with the world while strolling along, waves lapping at your feet, peering into rock pools or admiring pied oyster catchers as they go about their business.

A splendid few days, although Amy has decided she really doesn’t like the ‘drop dunnies’. While Oliver and I screw up our faces for our own amusement, Emma and Amy involuntarily screw up theirs at the thought of visiting the loo!

PS. To get to Mt William NP we passed through the little town of Derby. They mined for tin here extensively in the 1870s or so by dynamiting the mountain-side and then blasting it with water to sluice out the tin. The water to support this operation was stored in massive (for the day) dams and transported along elaborate channels.

Anyway, in 1878 (I think) the Breseis dam, which stored 188 million gallons of water, burst. Nearly 600mm of rain had fallen in 48 hours and the engineers hadn’t counted on that. The flow turned the Ringarooma River around and made it flow in reverse. 14 people were killed and an entire town washed away never to appear again. Fun times.

4 thoughts on “Made you look you dirty chook!”