‘Oooh what was that?’ said Emma.

What, the unusually enormous cracking sound you just heard as we ever so cautiously departed the Wynyard service station (which had a particularly deep gutter).

‘Oh, I’m sure it’s nothing but I’ll just pull over and check’, I say in reply.

A minute or so later… ‘yep it’s all fine’, I report back.

But it wasn’t. It was broken. The tow hitch that is, the bit where the tow bar is bolted onto the chassis of the car was bent, and two of the four high tensile bolts had snapped (I know, impressive eh).  Of course we didn’t know this until we arrived in the little town of Rosebery some 150 or so kilometres later. Yes, we may have been lucky the caravan didn’t part ways with the car during that journey. But it didn’t and that is a very fine thing.

Now, at this point all may not have been well. However as it turns out all proceeded remarkably smoothly. Having signed up to NRMA’s expensive version of roadside assistance we just placed a call. NRMA did battle with their agents in Tasmania, the RACT, for 30 minutes or so and then we had a tow organised for the next day, timed to coincide with our return from a bike ride to Montezuma Falls that we had pre-planned. The next day our caravan got a tow to Strahan and we settled in for the long weekend.

Now the reason you come to Strahan is to participate in the ‘live tourist trade’ of the Gordon River cruise. The ‘live tourist trade’ is something akin to live animal export and occurs in places where visitors are put through a similarly well-conceived production line. Pay your money, on the boat, off the boat, thanks for coming and don’t forget to spend up big in the gift shop on the way out.

Despite my cynicism, we were willing participants in the whole business and we had a fantastic day out. Macquarie Harbor is huge! Six times the size of Sydney Harbour but nestled in what appears to be a close to pristine environment. Five minutes out of Strahan and there is nary a hint of civilization to pollute the view, and on top of that there is some fantastic history to this part of the world just to spice up the whole experience.

You see, some 180 odd years ago the last 10 convicts at the Sarah Island penal settlement decided they didn’t want to be sent on to Port Arthur and instead thought they would experience the joy of being pirates (lucky devils). They overran their guards aboard the good brig Frederick, and set off for Chile. It all took place just inside Hell’s Gate, the narrow, turbulent harbor entrance. We likely cruised right over the spot where it all took place. The place is so untouched, I’d venture its physical appearance today is just as it was all those years ago – and so with a little imagination it’s not hard play out the whole saga in your mind as you go.

On Sarah Island itself you start to understand just what those fella’s were running away from. Sneeze at the wrong time and you would be strung up to receive a hundred lashes with the cat-o-nine tails, each strand laced with led pellets to help open your back up faster (I know, nice right). Of course most men could only take 50 or so at a time or they’d die. So after fifty it was off to the infirmary to heal, then straight back to receive the rest!

At least you could get a good nights rest. Especially the lucky ones chained up in a nice cosy cave on the even smaller Grommit Island just next door to Sarah. Cosy that is until the tide came in and the water levels rose to neck level. Sheesh.

During the day, when they weren’t being flogged, the convicts were out cutting down thousand year old trees, Huon pines, up the Gordon River. Great for building ships, especially the one you plan to steal to get away! The Gordon was gorgeous, mottled green forest tumbling down into tannin stained waters.

On the way back across the expansive Macquarie Harbour our cruise boat resembled something of an old people’s home. Especially when the grey heads started nodding off in their seats. I bet I do that one-day, but not that day. Emma and I were on the prow of the good ship with 40 knots of wind on the nose. Yep this cat had some grunt and it felt like we were flying. Amy and Oliver lent into the wind, jumped and almost landed in the Captain’s cabin. 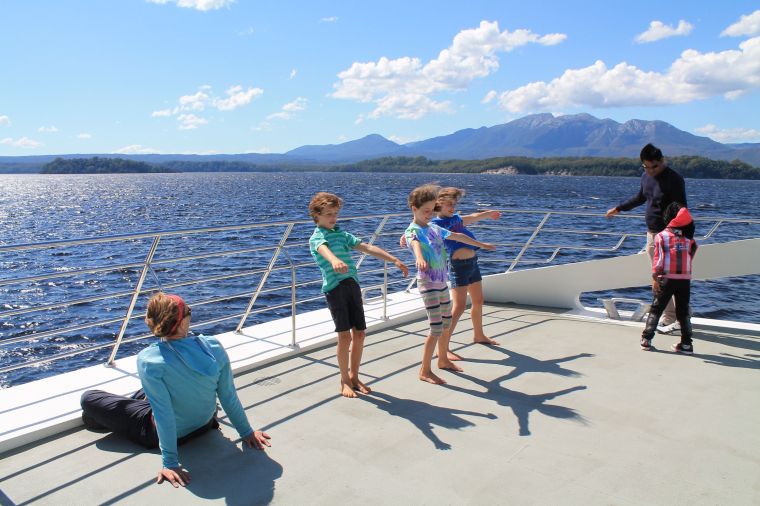 My fascination with life on Sarah Island and the escape of the 10 convicts took on a whole new perspective the next evening when we went along to watch the play, ‘The ship that never was’ – the longest continuously running play in Australia. It tells the story of the escapees in hilarious fashion, and for better or worse I soon found myself playing the role of Benjamin Russen, one of the convicts.

With all that going on, Tuesday morning soon rolled around and it was up early and off to Queenstown. The Falcon had a hot date with a mechanic who had developed a strong interest in her rear end.

While the car was being seen to we watched the live tourist trade at work with the departure of the Western Wilderness Steam Train, dodged rain showers, tackled the days school work in the local library and then watched the train arrive back again. I also kicked a few imaginary goals on Queenstown’s heritage listed gravel oval. He kicks. He scores! It’s a goal to Manning, what a legend! No one said that.

We had intended to move on this morning, but we hadn’t yet tackled the Henty sand dunes. A family conference was convened to decide what to do. You’ll never guess what was decided. Developing showers be dammed. We were off to the dunes! Tomorrow we are off to Lake St Clair. I’ve no doubt it will be good. But it’s hard to beat throwing caution to the wind down a sand hill. I wonder what the convicts of yester year would have made of the idea of coming to this place for that kind of fun? 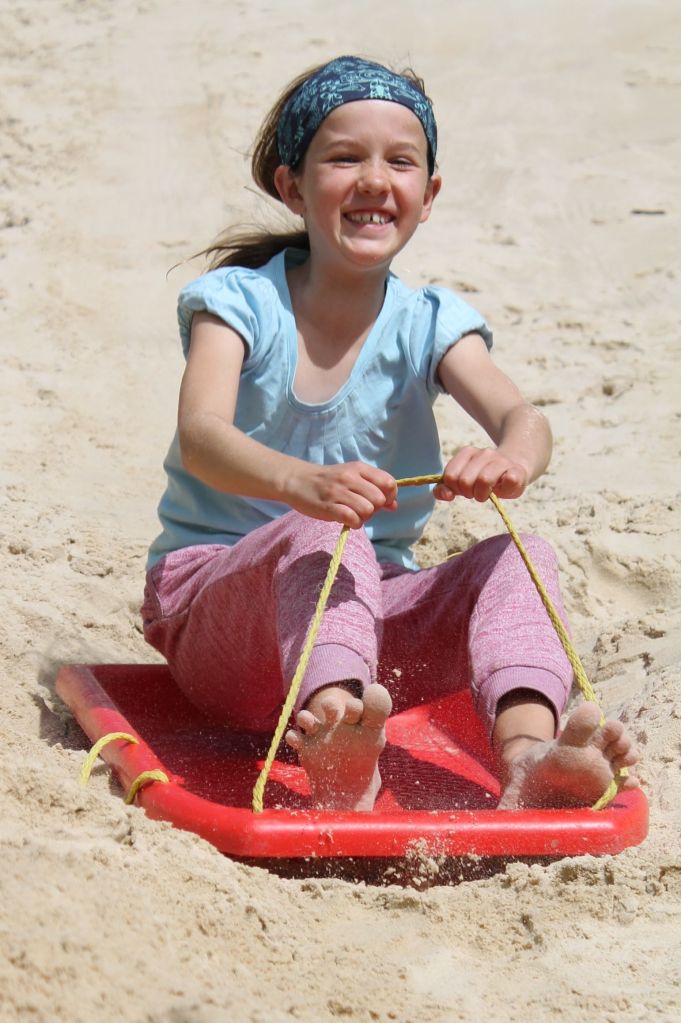 6 thoughts on “What was that?”