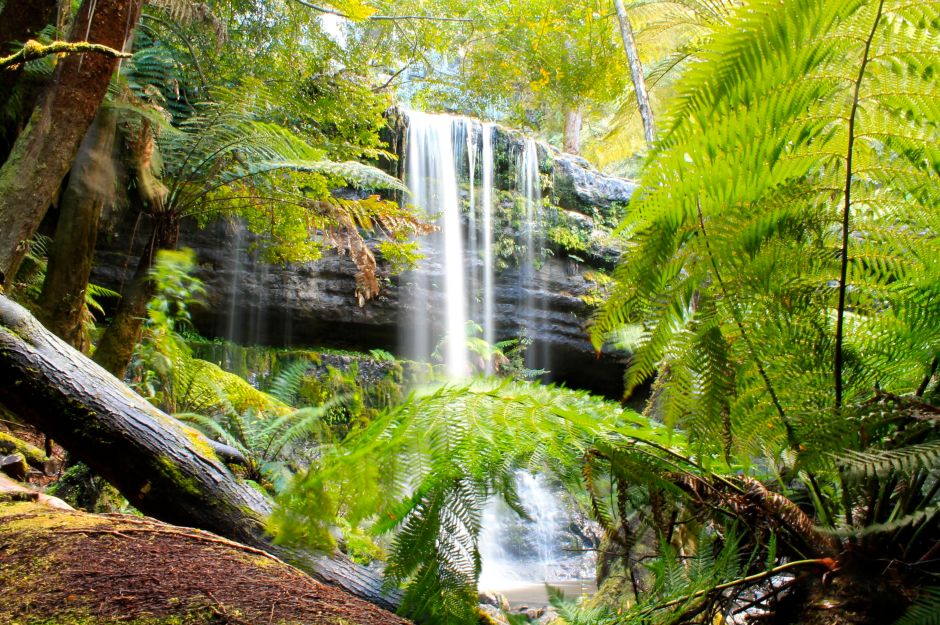 So much we’ve seen since last we wrote, I scarcely know where to begin. My favorite activity over the last few days though has got to be our night time strolls amongst the tall trees at Mt Field National Park. We nearly didn’t even come here, having over-shot the mark on the way to Hobart from the west coast and initially ending up in New Norfolk.

I’d never even heard of Mt Field until we got to New Norfolk, but the guidebook said it abounds with tall trees, eucalyptus regnans or swamp gum in particular. I love a good forest so we back tracked up the hill and have now been nestled in a campground at the base of a forest of trees up to 90 metres tall for three days.

Mt Field is a delight. You can overdose on waterfalls in Tasmania in much the same way you can overdose on churches and cathedrals in Europe. But if this is true, then Russell Falls here in Mt Field is Tasmania’s Notre Dame. A very fine looking waterfall falling over two wide plateaus and surrounded by tall, tall trees smothered below with tree ferns.

This was the scene of a most memorable nighttime stroll. Along the path to Russell Falls lies a glowworm encampment, hidden away beneath the tree ferns. We made our way through the forest, encountering numerous possums on our path, on a full moon with brilliant white light filtering down through the canopy. After visiting the glowworms we emerged into the clearing at the falls with moonlight highlighting the water and stars twinkling above. The clearing made visible the surrounding amphitheatre formed by the hills and made the trees appear even taller.

Amy clung to my hand tightly, while Oliver tormented her by moaning like a ghost. ‘Beware the dead fox’ he wailed, remembering only too well a recently completed book entailing such goings on. In fact, now that I think of it, Oliver really didn’t stop talking the entire time, with words streaming forth like water over the waterfall itself. One particular comment amongst the myriad sticks in my mind.

‘Well mummy, I would think you would have the good sense not to walk too close to me if you don’t want to get hit by my torch!’

I wonder where he got that from? Said torch was spinning in wild arcs lighting up the forest like a strobe light and scaring off any and all creatures with the exception of the unshakeable brush tale possums – which for that matter climbed all over the van a lot that night.

Right up there with nighttime strolls through the forest was our visit to ‘The Wall’. Just outside of Lake St Clair on the road from the west coast is a swanky new building sitting amongst the woodlands. Inside is long hall in the centre of which sits a long double-sided wall. The wall is about three metres tall, two inches thick and made from blonde timber laminated together. Into the timber has been carved a picture board of the story of the pioneers of the region – men and horses pulling logs through the forest and of the construction of the hydro electric scheme.

The carvings are extraordinary, bringing out with amazing clarity every muscle and every hair on man and beast alike. It’s like a painting out of the timber itself and refreshingly quite unlike anything I’ve seen before. There are a few side pieces scattered throughout the hall as well, including a block and tackle which looks for anything like it would work if you could just pull one end, and a pair of gloves carved out of wood and draped over a shovel. I just wanted to reach out and pull them on.

Unfortunately photos were not allowed, although the logic behind that eludes me. Equally unfortunate is the proprietors attitude towards children with signs throughout indicating that poor behaviour will not be tolerated. Poor parenting ought not be tolerated I agree, but don’t blame the kids. Grrrrr.

In between the forests of Mt Field and ‘The Wall’ we spent a day in Hobart, soaking up the joys of being back in civilization having emerged from the wilderness of the west. The contrast is quite amazing. I almost felt I could understand how those banished to Macquaire Harbour, be it for work or punishment, must have felt as they returned to the big smoke.

We explored Salamanca Markets, as you do, eating chocolate crepes, samosas, and wood-fired pizza before taking a short drive to visit the Shot Tower – a 48 metre high structure from which molten lead was dropped down into a bucket of water to make musket shots. All the better for terrorising the indigenous inhabitants of the island I dare say.

At other times we have just been endeavoring to live up to our collectively adopted theme song – Simon and Garfunkels 59th Street Bridge.

‘Slow down, you move too fast. You got to make the morning last. Just, kickin down the cobblestones. Lookin for fun and feelin groovy!’

We don’t always manage to succeed. We are slowing down, but we sometimes still move too fast. I’d like to have made the moonlit walk last. Tomorrow we will be kickin down the cobblestones on the way back to Hobart again – lookin for more fun and feelin very groovy.

5 thoughts on “Lookin for fun”