Geraldton is just a hop skip and a jump down the road from Kalbarri. Our plan was to blitz the town in less than a day and move on to spend the night at a free camp further south. We’ve decided that on the whole we like free camping for one night stop overs. Not just because they are free but because it is an altogether different experience away from the van parks. Amongst other things free camps have introduced Amy and Oliver to the joys of camp fires. They are also becoming connoisseurs on public toilets, discussing very matter of factly amongst themselves whether ‘…it is a drop toilet…’ and rating their cleanliness.

Anyway after failing miserably to ‘get a quick getaway’ we pushed on down to Geraldton. We had a list of things to see and do.

First off was a visit to the friendly people at Country Time Caravans. We had to replace the caravan tyres back in Carnarvon because they had both worn bear on the inside edge. A classic case of overloading thought the caravan man that came to look at our van for us. To much weight causing the axle to bend slightly, not permanently fortunately. The van only allows you to pack 300 kg and this has to include the gas bottles, water tank, and 12 volt battery which probably would account for half of that. Hmmm what can we ditch?

Having resigned ourselves to simply wearing out another pair of tyres if that was what was needed we moved on further into town. Geraldton is on the Batavia Coast. So named because back in 1629 the pride of the Dutch East India company, the Batavia, was ship wrecked on the Abroholos Islands 60 km off the coast from here. What ensued was a story of murder, mutiny and sexual slavery as the ships second in command launched a reign of terror over the shipwrecked survivors while the skipper, Commandeur Pelsart, sailed off on the Batavia’s long boat for help. It’s a cracker of a story and I highly recommend Peter Fitzsimmons book on the whole saga. Anyway Geraldton has a replica of the long boat which Pelsart sailed, along with 50 other survivors, all the way to present day Jakarta – and I wanted to see it. 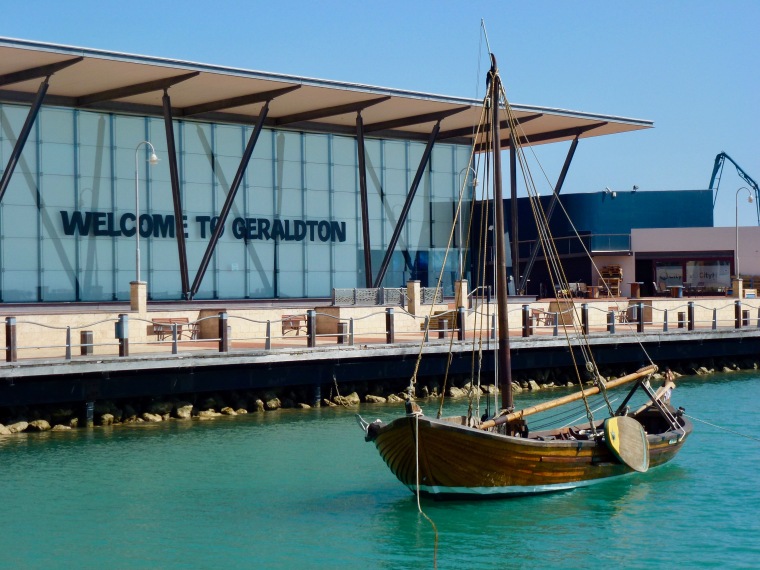 We located the longboat in question on the newly developed Geraldton foreshore area and were pleasantly surprised by the accompanying museum which had a whole display on the Batavia. I was very excited to see and touch one of the Batavia’s recovered cannons. There is something about coming face to face with an artefact of the past which just gets me. The cannon crosses the expanse of space and time between the events of 1629 and now. It is a tangible link to a different world and one which would otherwise exist only in my mind like any other work of fiction. The cannon reminds me it all really happened, the whole sorry saga. Wow.

Emma was very good and took Amy and Oliver off to explore other parts of the museum while I indulged my excitement about the cannon and other artefacts from the Batavia, like the stone portico it was transporting to make a new entrance for the city of Batavia.

Next on our list was a visit to the HMAS Sydney memorial. The Sydney was sunk during a battle with the raider Kormoran during World War II killing all 645 Australian sailors. The memorial is a large dome made up of one steel seagull for each life lost. 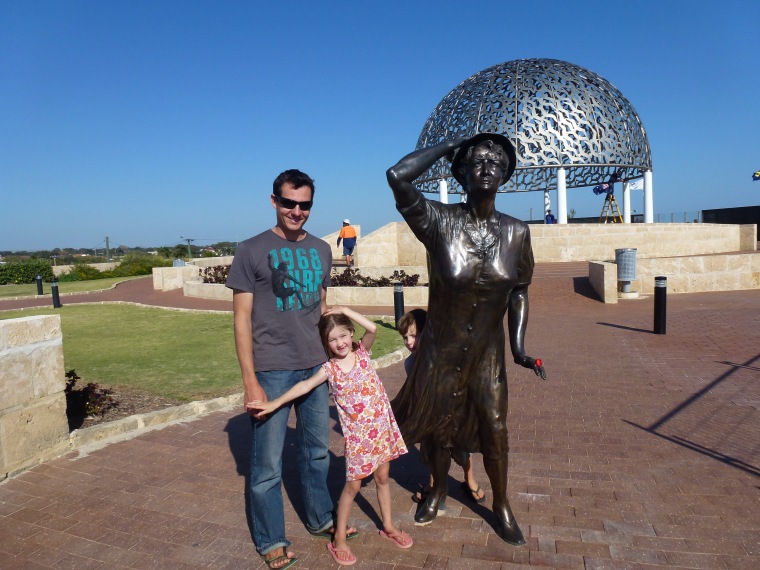 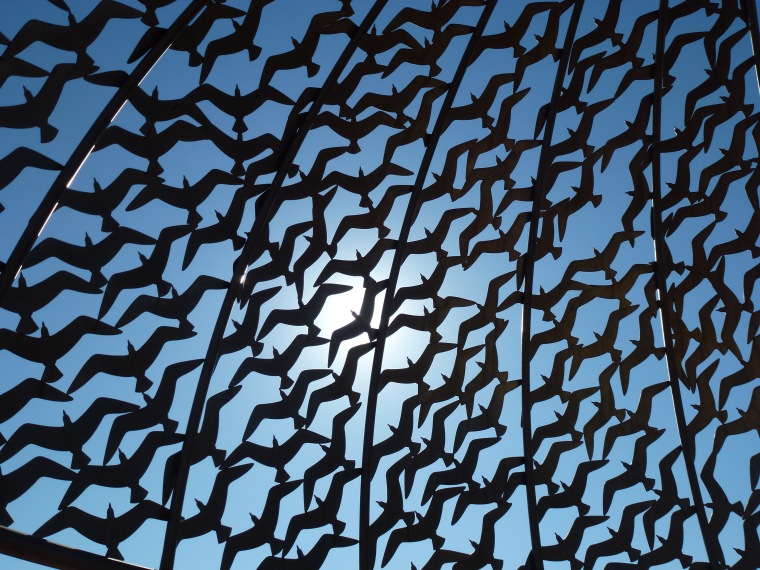 Last on a our list, or at least my list, was to see the famous leaning tree of Greenough which we stopped at on our way out of town. The sun was in the wrong spot for roadside photography so I haughtily leapt the fence for a better view. I’m sure I wasn’t the first. The tree basically grows sideways cause the wind blows so consistently around here. It IS the windsurfing capital of the world. 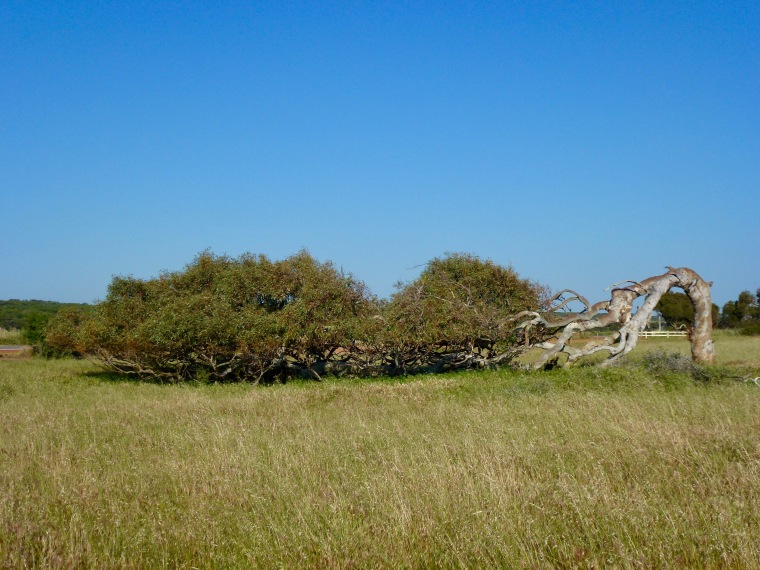 After spending the night at a free camp near Dongara we motored on down to Jurien Bay, gateway to the Pinnacles. Or is that Cervantes… Here I was rather taken by a particular old jetty and wandered off as oft as I could to snap it from another angle. The kids were very taken by the excellent beach side playground just outside our van park which came complete with sand conveyer belt. We spent quite a few hours there. Emma developed a fascination with what we had packed in the van and started cleaning everything out. We ended up mailing half our on board library, stock pot, two sheets and a bunch of other odds and ends home. The van is now 11 kg lighter. I climbed under to look at the axle and I’m sure it’s no longer straining! 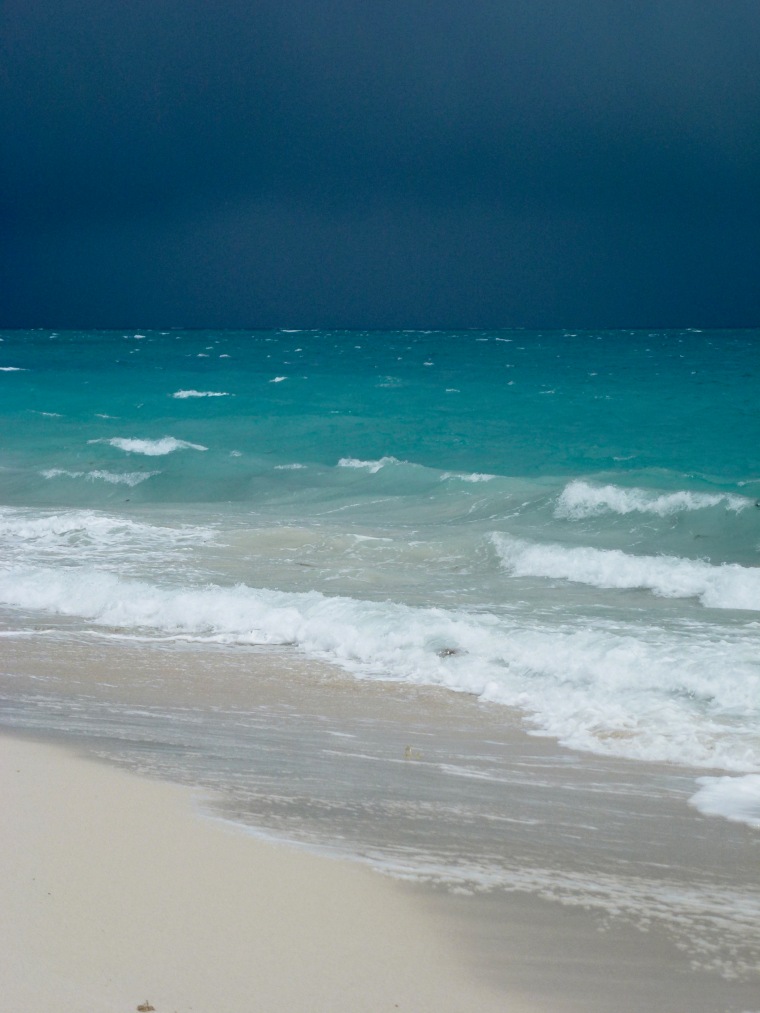 Without doubt the pinnacle of our stay at Jurien Bay was visit to the Pinnacles! It’s the strangest and most fascinating little place. Science is apparently still not sure just how the pinnacles were formed. They are quite unlike anything else and are stunning to see. We drove the 4 km loop through the park twice, stopping as we went for countless photos and to hide among the little stone sentinels. 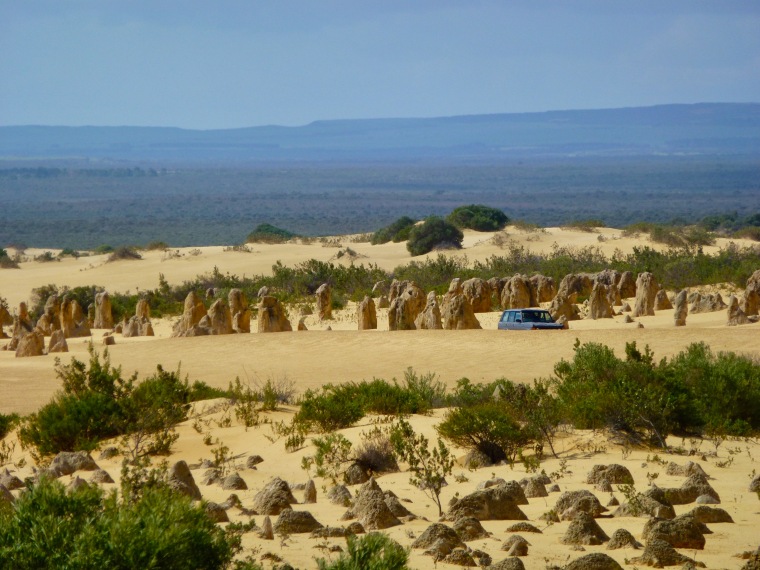 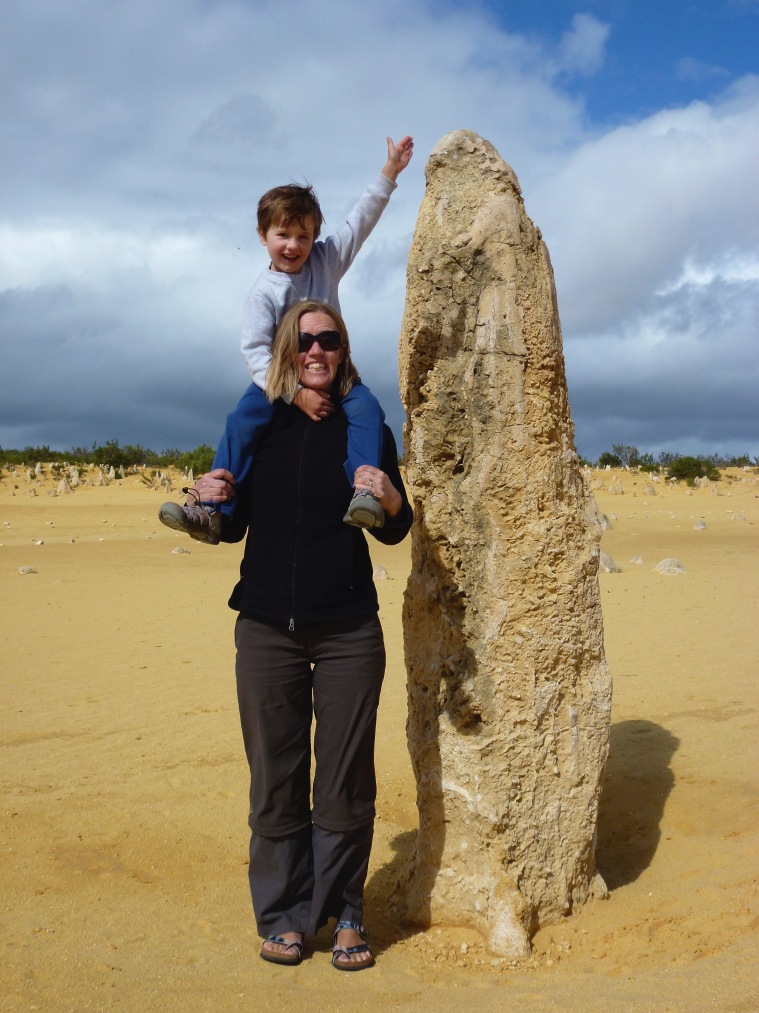 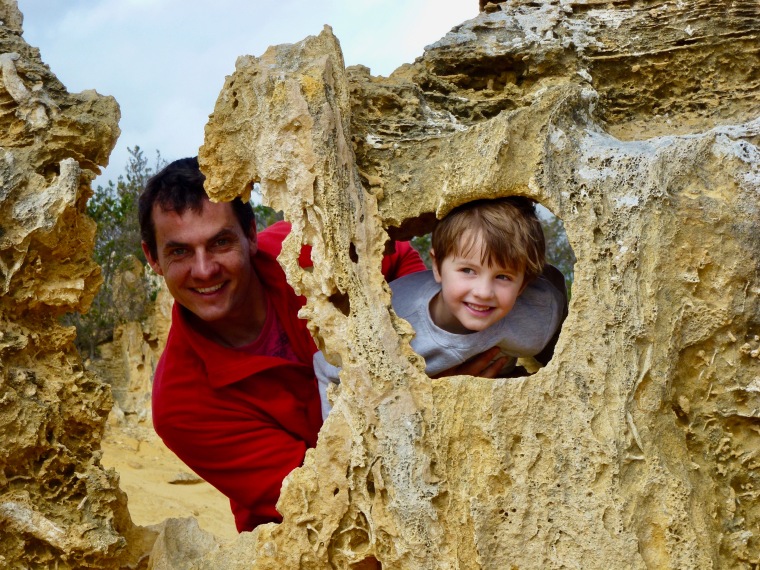 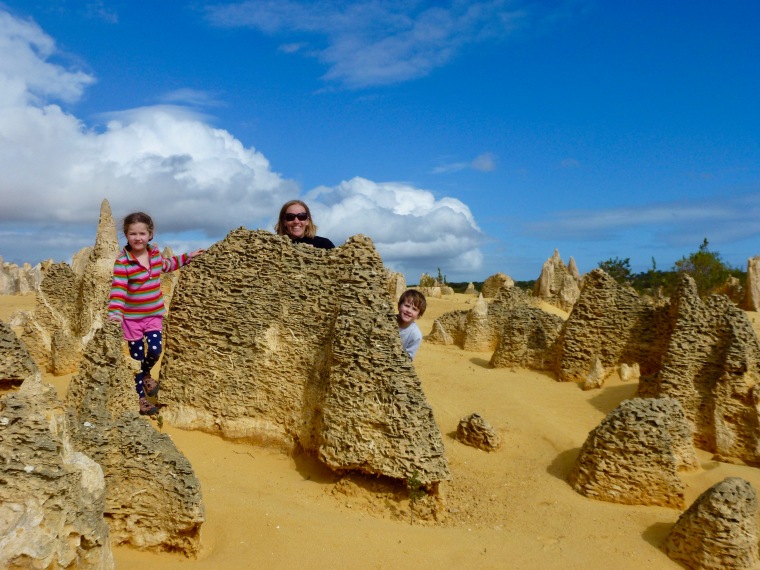 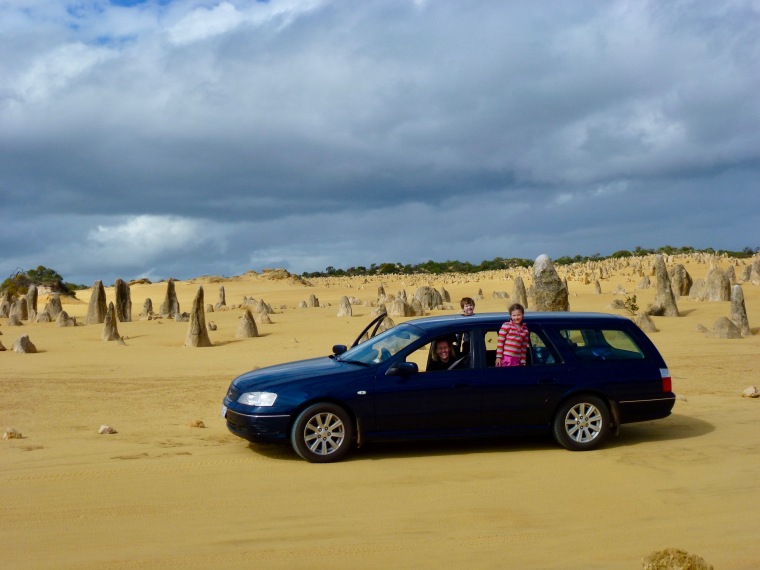